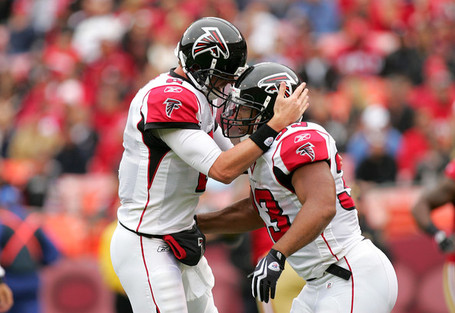 Everyone knows in the NFL that there is constant unpredictability that goes on. For example no one would've suspected the Chiefs would have been 3-0 and no one would have have thought that this weeks matchup, the 49ers, would be 0-3.

After last weeks brilliant game against the Saints, the Falcons are poised for nice slate of challenging, but winnable games. But often in the NFL the unpredictability takes over. So let's bounce over for a couple of things the Falcons should not overlook about the 49ers because this could very well be a trap game.

For those of you not in the lingo, a "Trap Game" is essentially a game where a team beats a rival one week then loses to a weaker opponent the next. While the 49ers are not necesserily untalented, they haven't got off to the best start.

I say "Trap Game" in the sense that last weeks game was so physically and emotionally draining, not just for us fans, but more importantly the players. Often teams can step over that fine line of confidence to over-confidence. The question is, will this team overlook the 49ers?

My response is no, because this team is so mentally focused and prepared that they are too good to let the old mantra of "let's take it week by week" slip up.

The 49ers have their backs to walls this week. Their fans seem depressed like all hope is lost. Really a nice long road-trip could do them some good.

But something keeps telling me that any given Sunday one team wins and one loses. I'm not trying to be pessimistic here, it's just we always have to acknowledge that one team gets the jump on another and happens to put it together on gameday.

Execution and consistency are my two words for the Falcons this year. This may be a trap game, but it's a game that they should execute and deliver consistently to bring home the 'W'.

So what do you think? Do the Falcons slip up? Or do they execute and blow the 49ers away like last year?

Will the Falcons overlook the 49ers?