Jerious Norwood Out for the Year with a Torn ACL

Share All sharing options for: Jerious Norwood Out for the Year with a Torn ACL 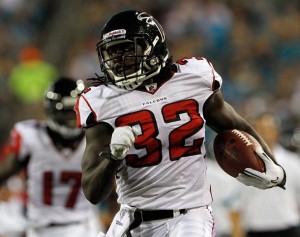 Jerious Norwood is officially out for the season. And he's headed for IR.

At this point, it's not outlandish to assume he's taken his last snap in Red and Black. And you can't really blame the Falcons brass if that's the case.

He logged more carries/game in his '09 campaign than in any previous season. Despite that show-of-faith by the coaching staff, he eeked out a measly 3.3 yards/attempt. In fact, his yards/attempt has gone down every year, which is telling since he pretty much logs the same amount of carries every year. Snelling has clearly established himself as our number two back and, to be honest, there's no reason to think that Antoine Smith can't bring more to the table as a number three back at this point.

The Falcons made two additions to their practice squad, signing RBs Shawnbrey McNeal and Gartrell Johnson. McNeal sounds like an interesting prospect, as some have compared him to a younger Darren Sproles. Johnson, on the other hand, is a pure power back. He's not going to blow right by you, but he may run you over and take your lunch money. Because they added two players to the practice squad, linebacker Bear Woods officially got the axe.

What say y'all? Are you ready to throw in the towel or is this just a minor speed bump? Can someone give Bear Woods a hug?!?!