Share All sharing options for: Statistics 101: The Wide Receiver Edition 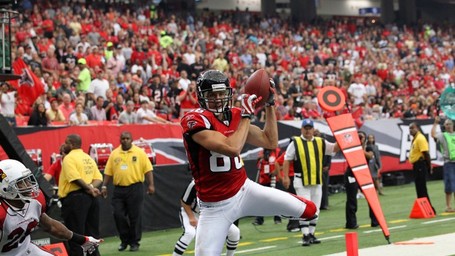 Some folks just have an eye for football.

Maybe you watch game film and - with nothing more than your naked eye - break down a player's strengths and weaknesses. Or maybe you can recognize that Mike Peterson is over-pursuing, the CBs aren't watching the backfield, BVG is repeatedly dropping Abe into coverage like it's the last play of the Superbowl, and Jerious is leaning like Dave after his 21st birthday, all in less time than it takes Roddy to drop a pass. And, if you're really talented, maybe you can break down the flaws in a QB's technique like you're John Gruden after free coffee day at Starbucks. It's called having a "football eye," and some folks thrive on that. In fact, some folks make a living doing that.

And then there are the stat geeks.

In this series, I am going to break down some of the commonly used and - for better or worse - some off-the-beaten-track statistics used to evaluate a given player's performance. We're going to take this position group by position group and - to kick us off - this week we're talking about that elusive bunch commonly known as WIDE RECEIVERS.

Join me after the jump if you're not already asleep and drooling on your keyboard ...

How do you decide how well a player is "playing"? How do you decide whether a player deserves a contract extension or a trip to the waiver wire? There is always plenty of commentary, game film, and so-called "expert opinion" to sort through, but how do you really break down a player's performance (assuming you aren't blessed with a "football eye")?

TD total has some utility. And for many, it's the quickest way to judge a player's performance. But as measuring sticks come, it certainly has its weaknesses. Some touchdowns are - without a doubt - more valuable and/or impressive than others. And wide receivers should, at least in theory, do more than just catch the ball (e.g., blocking ability matters). You'll find this statistic on most player profiles.

Getting better. Yardage/game, in my view, tells you more than TD total. Ultimately (and simply stated) it amounts to a rough explanation of the WR's contribution to a given team's offensive output in a given game. Granted, it - like TD total - does not account for certain things, like blocking ability or the value of the yardage itself. This statistic can also be found on most player profiles.

These are stats created by the stat-crunchers over at Football Outsiders.

Defense-adjusted Yards Above Replacement [gives] the value of the performance on plays where this WR caught the ball, compared to replacement level, adjusted for situation and opponent and then translated into yardage.

Defense-adjusted Value Over Average ... represents value, per play, over an average WR in the same game situations. The more positive the DVOA rating, the better the player's performance.

Last year (total) our receivers had the following DYARs (ranked from highest to lowest):

Once you get used to how the two statistics are presented - DVOA as a percentage and DYAR as a number - it's a lot more digestible. Both statistics and their relative strengths and weaknesses are explained in detail here.

Long story short, it can only be used to compare players who play in the same season (i.e., you can't use it to compare current players and former players). It's also completely dependent on the official NFL play-by-play, thus it doesn't always account for "what's really going on" (e.g., trick plays gone wrong).

Finally, it doesn't account for how your teammates and/or team's system limit your contributions. If you play in a poorly run system with a mediocre QB, your DVOA and DYAR will invariably suffer.

DVOAs and DYARs aren't updated immediately after every game. Sometimes it takes a week or so, which is totally understandable (given all that those stats encompass). In any case, DVOAs and DYARs can be found here if I've peaked your interest.

An excellent measuring stick in my view. Higher YACs generally means tougher, more elusive WRs. Can't beat that. Also found on Yahoo player profiles. Want an example of how this stat is relevant? Jenks had 50 receptions in both '08 and '09. But in '09, his YAC was 2.4. In '08, his YAC was 3.7. Last time I checked, that means something in the NFL. Just ask Weems, whose YAC was 4 in '09 (although he only had 6 receptions).

This stat can be very useful. It can tell you whether you're dealing with a deep-threat WR, or just a slot receiver-type. Be careful to account for sample size though, as it tends to limit this particular stat's utility on occasion. Roddy is a perfect example because his YPC has gone down every year since '06.

Very simply, the amount of balls a WRs catches out of the amount of times he is targeted. Because it depends on how often a player is targeted, one could argue that this statistic is - at least in part - affected by the QB's ability, although I personally tend to think the margin of error isn't all that significant. Catch percentages north of 65 mean possession-type receivers, and for those of you just joining us, that's a good thing. Catch percentages can be found here.

If you're facing the Falcons, you have to game plan for Roddy. Why? Because he's targeted far more than our other receivers. Some might call that a problem. We call that business as usual. ESPN box scores track this statistic.

Like my high school freshman team football coach always said, "If you can touch it, then you can catch it!" If you're a big play receiver, then you're bound to drop a few balls. Ask Calvin Johnson if you don't believe me (2 dropped passes already this year). On the other hand, a high number of DPs can be a huge red flag (I'm looking at you Jerious), making this statistic a great tool in my book. Believe it or not, Washington Post charts this statistic here.

If I had to rank these (personally), it'd probably go something like this (in descending order):

How about y'all? Rank your favorite WR stats in the comments and - if you're feeling the urge - explain your rankings.

And, most important of all, go forth and be statistical! Next week we'll discuss O-Line statistics.