Which NFL Position Groups Suffer the Most Injuries?

Share All sharing options for: Which NFL Position Groups Suffer the Most Injuries?

I've been thinking about this since the Falcons drafted Corey Peters. While most of us here think it was a fine pick, DT wasn't a *need* in any obvious sense. If we'd drafted a guard, for instance, we could have an instant starter instead of the likely backup (for the time being) we have in Peters. However, could it be that certain positions tend to experience such turnover that teams must stockpile extra talent?

I had a strong hunch that defensive tackles get hurt more often than other players. How to test such an assumption? To the mathmobile!

At which position groups should teams collect the most injury insurance? Let's break down end-of-season injured reserve data: 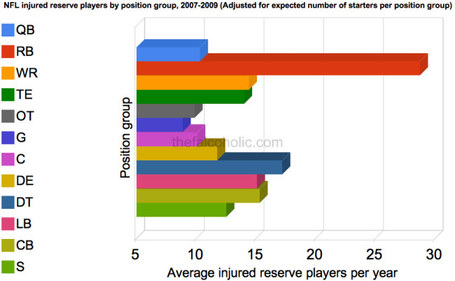 The chart accounts for how many players of each position are usually on the field at the same time. This means that while about 10 NFL teams can expect to have a QB on injured reserve by the end of each year, about 24 can expect to have either a FS or SS on IR. 24 IR safeties, divided by 2 safety positions, equals 12 average IR players per safety position. (I'll explain more.)

A verdict: As we saw last year when Jason Snelling was our last man running for half a month, RBs get hurt a lot. It's no wonder their careers tend to be the shortest of any position group, while OL stick around forever. The difference between DTs and non-RB positions seems pretty substantial. Of course quarterbacks get hurt the least -- every NFL offense, except San Francisco's, is designed to protect the QB. Safeties are also pretty safe (LOL), perhaps because they're the least likely defender to face contact during the average play.

This also means that, in the average year, most NFL teams can expect to lose one of their DTs (or, even more critically, their NT) for the season. Thus, losing Peria Jerry for '09 was no surprise at all.

Here's how I came up with this chart (you can skip all the rest if you want):

Finding the numbers: I'm pretty confident in the best IR data available for 2009 and 2008, while 2007's came from an old post in a gambling forum I've lost the link to and can't find again. That last one might sound shady -- however, gamble bros care about accurate and up-to-date injury reports more than anybody. Plus it's not like the '07 numbers ended up way off from the other two. All three years were pretty consistent, with the only really alarming outlier being the massacre of '09 linebackers (a dozen more IR LBs in '09 than in '07 and '08 combined).

I then divided that average by the number of players from each position group that are usually on the field at once. Let me explain that. There are always 2 OTs on the field, while there's always only 1 QB, smartass wildcat objections notwishstanding. So I divided the total number of OTs by 2 and let QBs ride. I also left C at 1 and divided G by 2, DE by 2, and S by 2, as that's how many players from each of these position groups are almost always on the field.

Things got trickier for offensive ball-handlers. Offensive coordinators have 5 spots to customize for each play, trotting out some combination of RBs, WRs, and TEs. If we had a set of really great data on how many of each type of ball-handler the average NFL team uses per play, that would be great. But we don't, do we? (Do we?) I figured it would be best to guesstimate 1.33 RB, 2.33 WR, and 1.33 TE appear in the average formation. This takes into account everything from 2-back/2-TE sets to 5-WR sets. It might be skewed a little towards my pass-happy concept of the modern NFL, as a surprising number of teams may typically keep 2 RBs on the field most of the game. However, the divider for RBs must be smaller than 2, as no NFL teams run Paul Johnson's offense and plenty use 1 or 0 RBs at times. (Plus, even if we divide RBs by a full 2, It's still the most injured position group by far.) My formula is not perfect at all, and if you have a suggestion for how these 5 spots could better be allotted, let's hear it.

Regarding 1.5 for DTs: first, many teams use the 3-4. Second, some 4-3 teams replace a DT with a coverage LB (3-3-5) or an extra pass-rushing DE when in nickel (as we used to do with DE Jamaal Anderson ... he's now a true tweener, so present-day Jamaal isn't the perfect example). I went back and forth on using 1.5 for DT, since using anything too small makes it look like I rigged the data to support what I'd wanted to support in the first place (i.e., drafting Corey Peters was smart because DTs get hurt more than anybody else), but the number has to be smaller than 2 to account for the 3-4. And 2 CBs is simply not enough, meaning the extra .5 has to come from somewhere. Can't take it from DE or S, as all common sets use 2 of each of these, and there are almost always more than 2 LB on the field. Let me know if you think 1.5 is too small of a number for DTs, but increasing it to 1.75 doesn't change its standing as the second-most IR-prone position group.

Regarding 2.5 for CBs: teams can have as many as 5 CBs on the field at once, and nickel sets have been base defenses in many games. If the extra .5 is off, it's quite possibly too small.

The total number of players expected to usually be on-field for each position group:

Caveats: Obviously this is only injured-reserve data. If we could include all the hundreds of Probables, Doubtfuls, Questionables, and Outs that surface during a season, who knows if things would change? Maybe certain positions are more likely to suffer small injuries and less likely to reach the IR.

My jimmy-rigged "players per position group on the field" formula can't account for special teams. Since more LBs play special teams than QBs do (you knew this, right?), this certainly nudges LBs a little bit higher on the chart. We could BS some percentages to throw in for special teams-intensive position groups. Then again, half the point of drafting a sixth-round LB is having another guy to throw at kick returners, so maybe special teams should just be thought of as a hazard that comes with not playing quarterback. Suggestions?

I still have all the data, so we'll break this out again next year with another season of data to add and hopefully a formula tweaked by your comments. Holler.