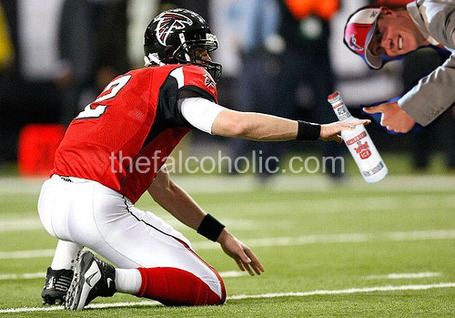 1. Collinsworth: Pro football's best color commentator declares the Michael Turner rushing attack his "favorite running game to watch. Mularky [SIC!] uses very clever packages of misdirection running and blocking that sets [SIC!] up their play action and bootlegs." The rest of the article is pretty standard stuff we've been over for months now, but it's nice to know the best analyst since pre-turkey-coma Madden thinks so highly of Turner South.

2. L.A. Times: Don Coryell, one of football's all-time most influential innovators, died Thursday. Madden, Mike Martz, Dan Fouts, and Norv Turner reflect. Coryell had a top-five offense for ten of his 14 seasons, including six top-ranked years, and went 2-1 against the Falcons. You have six minutes to watch this video on Coryell's genius, the physical toll of his passion for the game, and his post-football life. "I was not going to die on a football field. I had a lot to live for, and I wanted to have some fun."

4. Yasinkas: Old video of Ice, dressed up like an absolute goober, talking about golfing with Jordan, Gretzky, and Barkley.

5. Blogging Dirty: Troy leans out his window, takes a deep breath, and whistles a shrill tune into the air, summoning his bird friends from all across the kingdom. He ranks them according to their pro football accomplishments, and discovers our Birds have the, shall we say, most polite competitive history.

6. Black Heart Gold Pants and In The Bleachers on the news that Chris Henry had football-related brain damage before his death, despite never leaving a game with a concussion. Both articles are must-reads, will make you feel a little sick, and may make you want to become a badminton fan. One way or another, the game we love is going to change.