Introducing The Scale Of Falconliness: How Falconly Is Warrick Dunn?

Share All sharing options for: Introducing The Scale Of Falconliness: How Falconly Is Warrick Dunn?

This crossed my mind -- what does it mean to embody the Atlanta Falcons? Who's the ultimate Falcon? Which players and coaches most evocatively represent this franchise and city -- not necessarily the best players, but the most quintessentially Falconic? (And who's the ultimate anti-Falcon? Who's least worthy of being called a Falcon?)

That's what we're going to find out with our summer project: the Scale of Falconliness. We'll rate former Falcons on a scale of 1 to 10, with 10 being the most Falconly. I'll keep a chart as we go, showings who's been ranked where.

Let's kick it off with a tough one:

Bottom line: Very good player -- and more importantly, great man -- but when you're reviewing the Hall of Falconliness, how willing are you to overlook the following image: 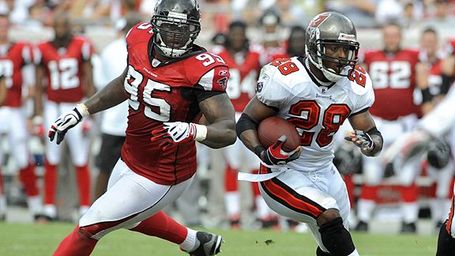