I saw this sticker on a truck in the local Wal-Mart parking lot.

I also see it on a ton of vehicles to and from my job every day (I commute a lot).

So LSU diehards are showing support, albeit sublte support, for the state's pro football franchise. I wonder why.

That got me to thinking. I wanna see these on all of your vehicles, UGA and GT fans! 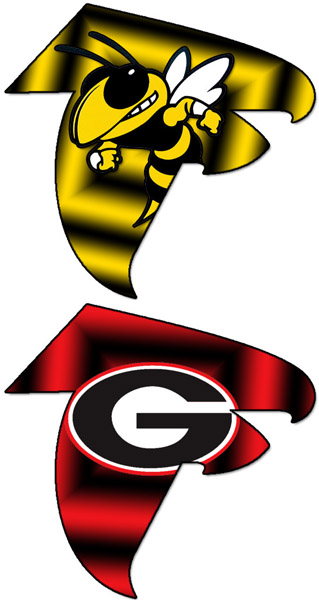 "Yeah, it's gotten to be like all Falcons all the time lately. I ain't been watching hardly any Georgia football past couple years."

I may be a greenhorn member of the "My license plate has Georgia on it" club, but I've noticed how seriously Georgians take their college football. You're either sporting UGA's cartoonish bulldog, a Buzz, or a foul foreign AU or UA logo on your car in my neck of the Georgia woods. That's a whole lot of college football.

I got to thinking. It's a huge "what if;" perhaps the biggest, most hypothetical what if ever conceived on June 4th at 4:00pm Central Daylight Time in the first year of the teen decade of the 2000's. Just ponder this: what if the Falcons achieve what Arthur Blank and company wish so hard to accomplish? What if Super Bowl 45 features the Dirty Bird being danced as the clock strikes "00:00?" What if a tradition of winning plants itself squarely in the FieldTurf floor at the Georgia Dome?

I've been seeing a whole lot of those fleur de lis' with LSU insignia in them, signifying the wearer's/driver's dual allegiance to Louisiana State and the (dastardly) Saints. Winning, to those fans, is synonymous with both franchises. Those fans are as rabid about their college ball as their pro ball. One has a Super Bowl. One has Les Miles. But let's not go there.

The south has long been chastised for its lack of support for professional football. Being born and raised in Alabama, a state where the phrase "professional football" is usually met with the response "whut," I can sympathize with the rest of the nation's bias against the southern NFL fanbases. I've seen it first hand growing up. I've also seen it first hand as a devout Falcons follower.

The Saints fanbase is what I'd love to see the Falcons fanbase turn into. No, I don't want us to start wearing black and gold, make as much noise as possible, and have a stupid catchphrase. No, I just want the love to be there. There are many users on Canal Street Chronicles that would go out of their way to wear some form of black or gold at all times of the day. They cover their cars and selves in Saints paraphernalia and live and breathe "Who Dat" every second of every day. I'm like that with the Falcons and as a purveyor of all things Dirty Bird, I tend to selfishly expect the same out of my fellow fans.

We are supposed to be fans, short for "fanatics." We're supposed to be proud of our team and love our team, even when it doesn't make the best decisions in the world. Yes, we've been hurt many times before. That's probably why we don't have such a rabid fanbase. The people of Atlanta seem to hold a grudge.

Recently, however, I've had UGA and GT apparel-clad people come up to me whilst patrolling the environs in full Falcons regalia and say "Hey, we're watching those Falcons. Every week." I even have friends from Alabama telling me that they're slowly starting to understand this novel "professional football" idea. I've got diehard Auburn fans saying to me "Let's bury the hatchet. I love the Falcons too." These are people from Alabama, where the only currently-active and successful professional football team is in Huntsville and just got sucked into the revamped Arena Football League. Consider me flabbergasted.