EA Sports has released the official Madden 11 ratings for this year's first-, second-, and third-rounders. You'll pretend to be interested in how they've assessed Sean Weatherspoon and Corey Peters, but it's ok if you really just want to see what rating they gave Tim Tebow so you can share your scholarly critiques of it.

EA has chosen to list these ratings in a PDF file, a la the year known as 1997. You can go here and download the PDF, print it out on paper, fold it up and place it in your pocket, smuggle it to the restroom, sit down, unfold it and examine it for 15 minutes, and then throw it into a trash can, or you can simply look at the screenshots I've posted for you of the relevant parts. 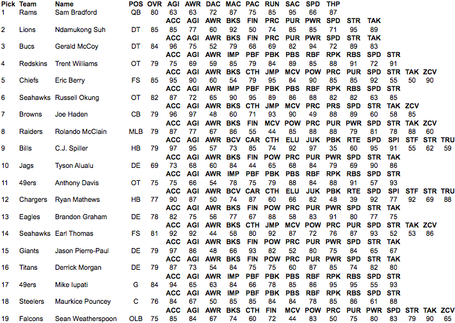 In case that's too tiny, EA has Spoon as a 75 overall -- lower than most of the guys drafted before him, and better than most drafted after him. Ok. A 75 rating would make him an instant starter using last year's ratings (Mike Peterson 80, Stephen Nicholas 66, though Peterson is sure to dip quite a bit this year). And with a 67 Awareness, he's the smartest player among all first-rounders and second smartest from the whole shebang, trailing Dolphins OLB Koa Misi by 1 AWR point.

His physical attributes and position skills are solid -- don't let that 44 Man Coverage rating fool you, as he's actually the highest-rated cover linebacker of all, with a combined Man Coverage/Zone Coverage rating of 104, 1 ahead of Rolando McClain. Spoon's biggest weakness appears to be his Pursuit rating, as he lags about 10 points behind every other linebacker.

How about Corey Peters?

Yep, EA went McShay ReachHype on us, as CP is the lowest-rated player of all. SEC All-Academic + spends his free time coming to conclusions = 33 Awareness, 40 Play Recognition? Not sure I'm following the math there. As we've discovered, at least two other teams (Dallas and Cleveland) had Corey ranked as a mid-third-rounder, with top-notch scouting departments like Baltimore's and Tennessee's also thinking enough of him to work him out. We'll trust multiple NFL scouts on this one, and look forward to Corey receiving a nice midseason ratings bump.