Share All sharing options for: The 1998 Falcons vs Everyone Else: 1966 Packers 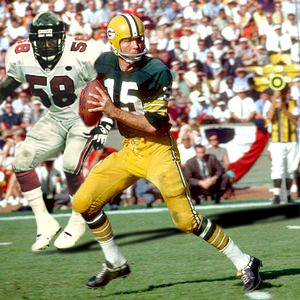 For the next few [insert desired lengthy measure of time here], I'll be taking our awesomely awesome 98 Falcons team (you know, the one that made it to the Super Bowl before John Elway decided to be a meanie head) and pitting them against different opponents from the past and present using WhatIfSports.com's SimMatchup technology.

I'm starting this little series off by letting them face off against every Super Bowl winner from 67 to 2010. Sounds fun, doesn't it? Follow the jump to find the results of the simulation.

The Pack's rushing game can't get started and Starr manages to overthrow receivers left and right in the first quarter. Atlanta doesn't fare much better, with Anderson failing to generate much rushing. Thankfully, Chandler saves the day not once but three times on their first possession to allow for an Andersen field goal. The second quarter begins with Atlanta up three over the scoreless Packers.

The second quarter begins with another Atlanta field goal. Starr finally manages to look like a proper quarterback and begins an assault of short passes that get Green Bay in range for a score. At the nine yard line, the Packers pound three times on the wall of Falcons defenders and find nary a crack. Green Bay winds up taking three. The score at the half: Packers - 3, Falcons 6

Green Bay kicks off to the Falcons to start the second half and forces the birds to go three and out. However, the Pack is unable to take advantage of this and fumbles the ball away a few plays later. Using this momentum swing, Chandler hits a 39 yard pass to Martin, who is tackled at Green Bay's nine yard line. Two plays later, Jamal Anderson punches into the endzone on a draw. Starr finishes the quarter out with overthrow after overthrow.

The Packers now down ten, Starr is forced to go to the air. Sadly, he's hardly ever on target. With five minutes left in the game, the Pack decides to go for it on fourth down with the ball sitting on their own twenty three. Starr underthrows a receiver and the Falcons are once again knocking on the door. Jamal Anderson puts up six after another long Chandler-to-Martin connection. The Falcons end the game with a few well placed knees. Final score: Green Bay - 3, Falcons - 20