Dave the Falconer here. Please let brickcheney tell you about why he's joined The Falcoholic team, and let me say that we're thrilled to have him aboard. tloz and I won't be going anywhere, so you'll be getting more delicious content than ever now that he's joined our writing team. Mmm....content.

Hello, my name's Jason. I'm the new blogger #3 around here. You could say that makes me The Falcoholic's John Parker Wilson, though I prefer to think of myself as one part Billy Joe Tolliver '91, no parts Kurt Kittner ever.

The plan is for me to pitch in a weeklyish post or so and post link roundups from around the web. I try to keep it real, but I'm often a raging sports optimist when it comes to my teams. You and I may rarely agree, and I'm sure to be wrong constantly. But you like interacting with different perspectives and opinionated fellow fans, so TERRIFIC!

Please permit me to gain your favor by establishing my Falcons bona fides:

Many of you have complex and interesting stories of falling in love with Falcon football from afar or after trying out less distinguished teams; I don't. For whatever reason, I latched onto football as my sport early on. Geography did the rest, as I was born in Atlanta (HOME PARK STAND UP). That's the entire story.

OH I COULD GO ON. Trust me folks, I bleed red. As does everyone. But for different reasons.

When I'm not bleeding, I'm a father of a one-year-old and husband of a 27-year-old in north metro Atlanta. I obsess over rap music, DO HOBBIES, also cheer for the Hawks and Yellow Jackets, and help run a web design company, which you can see here. I also blog there. So.

One last thing. As a token of my appreciation to all of you for having me aboard, I made you a present: 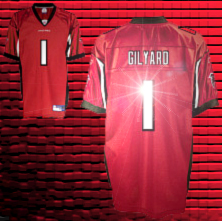