Share All sharing options for: The Atlanta Falcons Drinking Guide

Yesterday we learned that our beloved Kroy Biermann's nickname of destiny is actually Duffburger, not Duffman as we'd believed.

After imagining a beer burger made with Duff beer, I decided to fill out The Falcoholic's menu with dranks inspired by our squad. Let's go:

Beer burger made with Montana's own Big Sky Ale.

According to the Internet, this is a shot of blue vodka plus a mix of orange juice, lemonade, and spindly legs.

Dan Reeves' A Glass of Red Wine with Dinner on Thursdees

The man has AA in his name.

Sam Baker's Sex on the Beach

You can never unthink it.

Oh come ON. The man opened an Atlanta WINE BAR, then he went to DOG JAIL.

To reflect his team colors and ethnic heritage:

The only hangover comparable to facing Dahl for four quarters.

Because you always know exactly what you're gonna get.

Blend this stuff with lots of fridge plants ("berries" or "fruits, "some green-beans"). 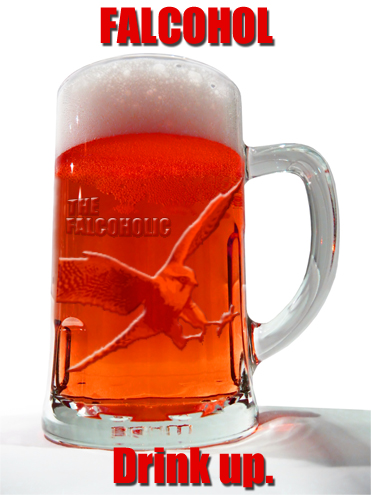 You're up... Round out our establishment's selection in the comments.