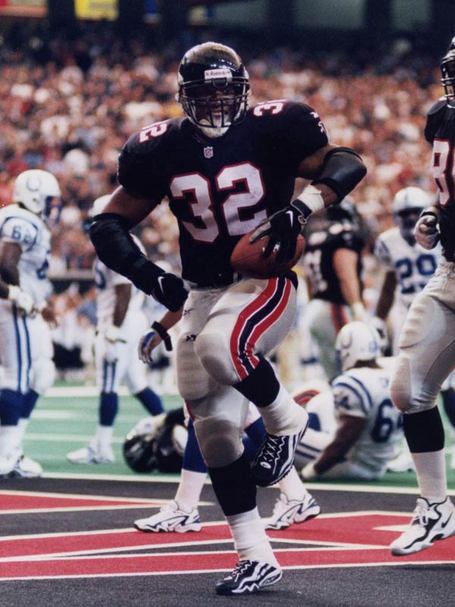 Follow the cut for the second part of my interview with former Falcons runningback Jamal Anderson!

I think this team… hopefully these guys will put it together. It was an interesting season for them. You had, at one point, Mike wasn’t really rolling and Matt was a little bit off, then they go get hurt. All these young inexperienced secondary players and your veteran cornerback goes down.

You know, I really like this kid, Kroy [Biermann], maybe we can have ourselves a Jared Allen. It sure would be nice, you know?

JA: I do. You know, for me, I’m always going to have a soft spot for the guys who come from nowhere and make something of themselves. Obviously, being picked 201 of the seventh round, I tend to have an affection for those types of players. Every once and a while, players like that make it to another level. You know, Tom [Brady], Terrell [Owens], we did a good job turning the league on its ear and producing. But it doesn’t happen all the time, and that’s why it’s such a big special around draft time. "Oh, who are the people they’ll draft, blah blah blah." You know how they do that.

tloz: [laughs] Yeah, I do. So what do you see the team doing this year? What are your expectations?

JA: Dunta Robinson is in, I think that’s gonna be a good look. Matt will be fine… I like this team. Circumstances dictated the season the Falcons had last year. I would be disappointed if eleven wins don’t come. This team needs to do what it needs to do in free agency and the draft. That’s Thomas’ strong point. Tony’s back for another year, all of these guys are going to be on the same page.

Alright, I gotta get running.

tloz: I do have more questions for you, because we had a lot of fan-submitted questions, and a lot of the fans added "Can he suit back up." I said "I don’t know, I’ll ask."

JA: You know, the best thing I could tell them; there’s a clip of me on Pros versus Joes and if you watch it… you’ll see.