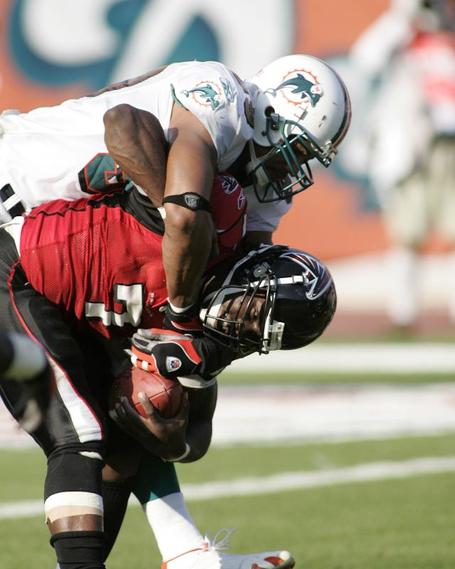 It's a new football season so I thought it would be prudent to introduce a new feature. Every game week, I'll be looking at the all-time series between our amazing Falcons and their dastardly opponents. I'll bring stats, records, and interesting tidbits about our illustrious franchise's history with each opponent they face this year. While I have said before that the past does not dictate our future, it's still interesting to see just how the Falcons have handled their dreaded foes before.

This week, our Dirty Birds are facing the Miami Dolphins, a team that posted an incredible turn around between the 2007 and 2008 season. Sound familiar? Yes, the NFL does schedule for drama and there's bound to be plenty of it in this meeting of resurgent teams. Will the Dolphins' wildcat, featuring Rushin' Ronnie Brown, be too much for our solidifying rush D? Will Jason Taylor manage to sniff out Matty Ice? Will John "The Predator" Abraham have some Chad Pennington, raw, with a side salad and Pat White strips? Will Tony Gonzalez set up residence, complete with tent and full-service gym, in the Dolphins' endzone? Will Michael Turner go bowling for Miami defenders? All these questions and more will be answered this Sunday. For now, you'll just have to make do with these fun tidbits about our team's former meetings with the Fish.

For the Record: The Falcons have met the Dolphins for ten glorious battles in the past. The current series record stands at 3-7. Two of those games were played in the preseason.

Real Estate Boom: Since the first meeting in 1970, the Dolphins have gained 3028 net yards against us. We've managed to best that by 200 yards, gaining 3228 net yards.

Making A Point (or Seven): The Dolphins have owned us in points scored, racking up 216 to our 181. That's five touchdowns, for those of you keeping up.

Beat Ya by This Much: The largest point differential in a game came during our 1998 meeting with the 'Fins. With two long pass TDs taken in by Mr. OJ Santiago and a bruising 36 yard TD by Jamal Anderson, the Falcons ended the game with a twenty-two point lead on the (then) 10-5 Dolphins.

Showing Off(ense): The largest differential in yards gained belongs to Atlanta. In 2005, the Falcons gained 382 yards to Miami's 208. That's a difference of 174 yards.

Keepin' it Tight: Half of the games we've played with Miami have been decided by seven points or less.

Defending the Nest: The Falcons have a 1-2 record when hosting Miami.

We Came, We Saw, We Conquered: The Falcons have a 2-6 record when visiting Miami.

Follow the jump for a game-by-game breakdown and box scores.