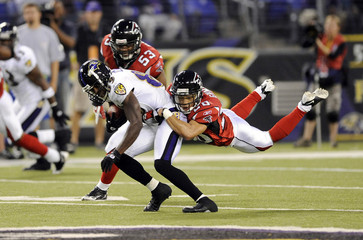 This game is for the birds. Ha! Birds.

The best test of our young, dynamic offense will come today, when the Falcons take on a notoriously tough Baltimore Ravens defense. Our suddenly adept pass rushing defense will also be sorely tested against the Ravens hydra-like running back attack. The secondary, meanwhile, will have a chance to look pretty good against a group of average receivers, though prodigy quarterback Joe Flacco may well make them look better than they have any right to be.

I'll be looking at this as a tune-up for many starters, and a final chance for guys to prove they deserve a roster spot. This is also a critically important game for the secondary, which Thomas Dimitroff may not be done overhauling if they collectively fall on their face today. For a final pre-season game, there's a lot at stake.

But before I get all maudlin on you, let's hop into this week's game factoids.

Weather? A beer cloud drifting up from some sections of seats, otherwise mostly clear.

Fun Fact? This is the second week in a row we're re-uniting with an old star, albeit one that was only with the team for part of a season. Domonique Foxworth will try to make life miserable for the Falcons tonight.

Foe? You've already been introduced, but please go check out Baltimore Beatdown. Bruce Raffel does a great job over there.

GO FALCONS! Let's take the Ravens out of the sky!