Share All sharing options for: The Falcons Fan Experience

What better way to break in a new game day than a recollection of last week's win? Saturday night's game against the Chargers was my first time ever watching our Birds live. To say that it went as good as I had hoped would be an understatement.

When I first purchased my season tickets, I had only two real requirements of the first game:

I got both and then some Saturday night. What follows is one fan's first time account of visiting the Mecca of Falcons Football.

The Dome on game day is akin to a block party. There are vendors, games, sidewalk wares hawkers, and tons and tons of traffic cops. My esteemed fiancee, my "lucky" game buddy, likened the experience outside of the Dome (especially in and around Falcons Landing) as a fair. Indeed, the air was filled with laughter, the sweet scent of tailgater food, and the sights and sounds normally associated with parlor games and rides. Cameras were snapping, children were playing, and grown men were teary-eyed with anticipation. Ok, maybe the men were just excited.

The I Deck was my parking sanctum of choice this season, as it is tailgate free (read: less crowded) and harbors a quicker, less-trafficked route to I-85. This does mean a ten minute+ walk to the Dome, but soaking in the game day sights, sounds, and smells on the trek to the stadium is well worth it.

After soaking in the many sights and sounds of the Falcons' pre-game activities, we made our way to my seats, all the way up in level 326. The statement "There are no bad seats in a dome" is categorically true; however, there are "better" seats to be had. Unfortunately for me earlier this year, I could only afford upper level seats. Fortunately I had my fiancee with me. While I was gushing over the best all-time player banners hung from the rafters, two besuited individuals with a clipboard approached us.

"Congratulations, you've won the AirTran Business Class upgrade seats." And then I was handed a Matt Ryan jersey and led to actual airline seats sat in section 245 of the Verizon Club Level. And then my fiancee and I were filmed before the game even started, acting enthused and excited over the pregame warmups. We aren't very good actors, but the finishing product that aired was embarrassing, but ok.

With a whole new vantage point, I stood up as the Falcons Drumline flanked the Cheerleaders before the Falcons' and snapped off the panorama you see at the beginning of this post. Then I jumped up and down like a true homer as each name was called.

I took part in it all. I booed the SD player intros, the "bad" calls, and the non-calls. I yelled and clapped as much as I could on the many third and a bajillion situations when SD had the ball, and guffawed at everything Freddie Falcon did. I cheered on the pee-wees at half-time, I listened and, as much as I'm ashamed to admit it, agreed with some select nearby fan comments about certain aspects of the game. I jumped to my feet on every score, I leaned forward and bit my nails with every third and long, and I jumped up and down screaming my head off when Eric Weems hauled in Chris Redman's pass on fourth and goal with a scant 9 seconds left.

Though I returned home with a sore throat, headache, and the beginnings of a cold, I was a figure of fun, a symbol of contentedness, and best of all, satisfied. My first trip to a Falcons game, even if it was only a preseason matchup, was one of the most electrifying and exciting experiences of my life and I can only hope that the rest of my visits to the Dome this season are half as fun.

Unfortunately, I won't be making the trip to the Dome tomorrow night, so I've sent zooker and gritzblitz in my place. Enjoy the game guys! 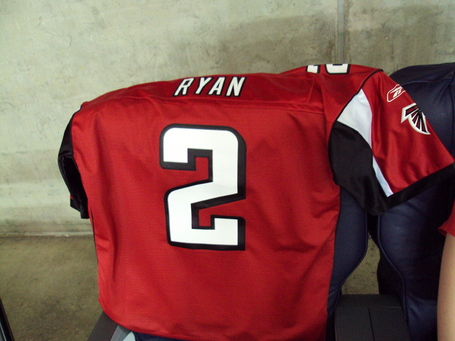