Share All sharing options for: Why The Atlanta Falcons Need LB Mike Peterson 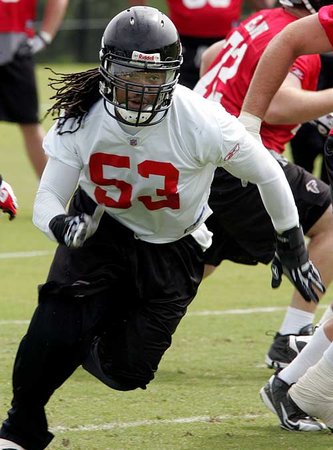 It's only taken one week for me to do an abrupt 180 degree turn on Mike Peterson.

Yes, I'm the guy who greeted news of his signing back in March with a resounding "meh" worthy of reader Hardcore Falcon. I'm the guy who said he'd be a useful stopgap. I'm the guy who sounded a little bit skeptical of his ability to return to the field at full strength. I also don't believe in the Great Pumpkin, Sasquatch or the little men living in my radio. So sue me.

I don't think it's an exaggeration now, however, to say that Peterson performing well is absolutely critical. He's grabbed a leadership role on this team and seems hellbent on proving that talk of down years and problematic behavior either is in the past or never existed in the first place. After his Falcoholic MVP-winning game against the Dolphins, it's clear that he's still got at least half a tank sitting around and he's ready to use it. Leadership can be an overblown quality, but Peterson's taken to the role so easily and has such a good rapport with Mike Smith that it would be unfair to look past it in this case.

It's critical that a young defense has a leader, and it's more important that a linebacking corps that was pretty average last year is getting a huge boost from the second-year improvement of Curtis Lofton, a better-than-expected showing from Stephen Nicholas and Peterson's excellent play. Against the Panthers, who as previously noted have two strong running backs and a passing attack that might get going if Jake Delhomme can muster up the effort, we're going to require a strong performance from the linebackers to hold up those plays that go beyond the front four. I suspect there will be quite a few of those.

So don't count me among the surprised if Peterson has another giant game against the Panthers. Would it surprise you?