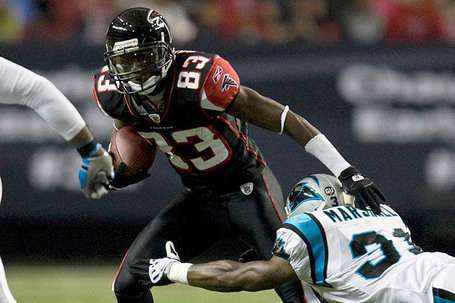 Every game week, I'll be looking at the all-time series between our amazing Falcons and their dastardly opponents. I'll bring stats, records, and interesting tidbits about our illustrious franchise's history with each opponent they face this year. While I have said before that the past does not dictate our future, it's still interesting to see just how the Falcons have handled their dreaded foes before.

Sunday brings our dreaded blue-threaded division foes to the Georgia Dome. Do not expect the cats to roll over on us like they did for the Eagles. Fox will be trying to redeem the talented but inconsistent Delhomme while the Panther's rushing attack looks to up the ante on our young and speedy D. Carolina has a chip on its shoulder and I smell a trap game [insert "It's a Trap!" net meme image here]. Most are not expecting much of the Panthers, so in that regard, I'm not taking them for granted. Thankfully, neither is Coach Smith.

For the Record: The Falcons have met the Panthers twice every year since the cats were introduced in 1995. That's twenty-eight games. The Falcons' record against Carolina currently stands at 17-11.

Real Estate Boom: Since the first meeting, the Falcons hold a 627 yard advantage in total yardage. The Panthers have earned 8278 against us. The Falcons best that with 8905.

Making a Point (or Seven): We have (thanks to a couple of epic blowouts in 2002) a 53 point lead over the Panthers in total points scored in the series. In football terms, that's seven touchdowns and just about two field goals.

Showing Off(ense): The Falcons were certainly showing off against the Panthers on their second meeting in 2002. The Falcons gained a total of 426 yards to Carolina's 122, a difference of 304 yards. Domination is definitely a good word to use here.

Keepin' it Tight: 54% of the games we've played with Carolina have been decided by a touchdown or less.

Running Away with It: The Falcons have posted a victory margin of two touchdowns or more against the Panthers a total of six times, or 22% of the two teams' meetings. The Panthers have accomplished the same feat 4 times (14%).

Goin' Streakin': The longest win streak in the series belongs to Atlanta, who won six straight games against the Panthers from 2000 to 2002. The Panthers have never won more than two in a row against the Falcons.

Defending the Nest: The Falcons have a 7-7 record when hosting Carolina.

We Came, We Saw, We Conquered: The Falcons have a 10-4 record when visiting the Panthers' turf.