Share All sharing options for: Observations from Section 326: Week 1

Thanks to Falcons New Media Director Dan Levak for making this story happen. Thanks Dan!

MentallyMIA and I arrived at Gate E a tad bit early to pick up pregame sideline passes. Once we had them, Dan led us towards the field. On the way, the following occurred:

"Hey Dan," someone exclaims from behind the three of us.

MentallyMIA and I turn around.

"Hey! How're you guys doing?" asks the gentleman as he steps in line with us.

I lose it for a moment, the recognition of the face staring back at me slow to travel from my eyes to my brain. I finally manage a smile and a slightly distant "I'm doing well, Mr. Dimitroff."

And then the Comrade jogged forward and entered the locker room with what seemed to be a knowing smile on his face. Perhaps, even then, two hours before the game, he knew of the upcoming domination of the Fish.

A few moments later, Mental and I were on the field, crossing that mythic yellow-dashed no-zone. Harvey Dahl, standing ten feet tall and just about as wide, shot a wave at me. I cowered for a moment before nodding in his general direction, making sure to quickly break eye contact. As we made our way across the Falcons bench, Dan explained the equipment and how everything on the sideline was done, from the headsets to the play-by-play snapshot maker.

Once settled in our sideline "area," we chewed the fat with Dan a while and started snapping off pictures. I managed to catch this with my camera before actually seeing it: 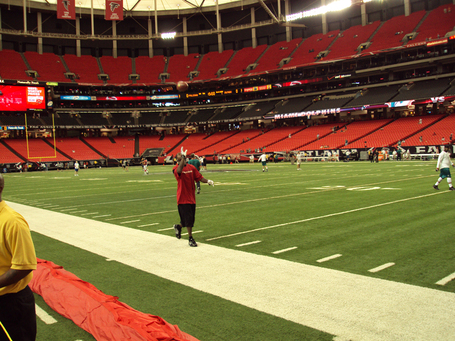 That, ladies and gentlemen, is Harry Douglas 5 days after having invasive knee surgery. With a very slight favor to the injured leg, HD scooted in front of us. Mental, being the gungho soldier he is, called out "That knee looks fine!" Harry turned around, pointed at James, and nodded. "Just had surgery on it Tuesday! It's feelin' good man! Can't wait to get back out there." I pointed right back at him, "Neither can we, but we want you healthy!"

Once 12:30 rolled around, Mental and I made it back to our seats and enjoyed one heck of a game.