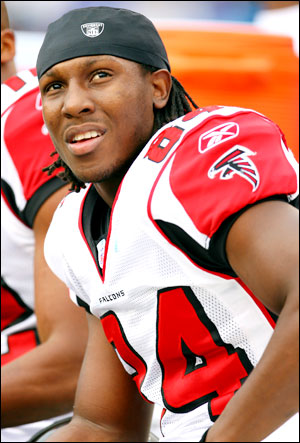 A big hat tip to those of you (like mcboyt and ca$hmere) who were all over this news last night, but Roddy White has inked a $50 million deal that will guarantee him $18.6 million over six years.

Obviously, this was a deal that had to get done so we could have our best receiver in camp, particularly after we lost Harry Douglas for the year and our depth took an enormous hit. While the length of the contract is pretty staggering, White's still quite young and the guaranteed money involved is nothing that's going to break the bank. If Roddy puts up huge numbers and racks up bonuses like it's going out of style, I don't think any of us are going to mind paying him. I'll chip in ten bucks myself.

This also ends what could have been a long and acrimonious process between the team and White, something I worried about increasingly as the week wore on. Setting a precedent for this kind of situation in the future was critical, and despite the enormous leverage the receiver had when the injury bug bit Douglas, it's really not a terrible deal. In short, everybody at least sort of won, which is the best kind of victory you can hope for.

Now that White's in camp, he'll resume his spot atop the depth chart, which leaves the Falcons to shake out things at the lower levels. Our starters on offense remain potent and now that Roddy's got his new deal and has Tony Gonzalez to take some pressure off of him, he should be primed for an enormous year. Something north of 60 catches, 1,000 yards and seven TDs wouldn't be unreasonable.

As you can probably tell, I'm just relieved this situation is over. How are you feeling about the deal, and what kind of numbers do you think Roddy White will put up this season?