Ok guys, I’m going to be doing a position-by-position breakdown using some of the advanced stats from the Football Outsiders Almanac 2009. I’m not going to have anything to say about the rookies or guys that have not been on the field much (because they won’t have any stats to work with). I’m going to try to not simply list tables of stats, because you should buy the book – but some of these are really useful, especially on defense where you normally can’t get much more than Tackles, Sacks and Interceptions. And since we need some good news after hearing about HD, I’m going to start with the Defensive Backs. You ask, "So you’ve got good news from these unproven DB’s?!" – To which I reply, "Why, yes. Yes I do." Jump with me to find out. 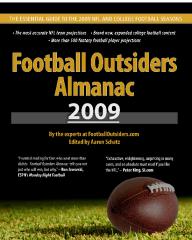 Some of these numbers are simply the official totals from the NFL, but the majority of these stats are from the Football Outsiders game charting project – they have many volunteers who watch every game with detailed instructions to note things like formations, number of blitzers, who is the closest man in coverage, etc. I’m going to give an overview of some of their Individual Defensive stats, for those who are unfamiliar:

Defeat: Prevent Offense from converting a first down on third or fourth down, a Tackle behind the Line of Scrimmage, or a Play that results in a Fumble or an Interception.

Stop Rate: Percentage of Run Tackles that were a Stop.

Targets: Number of plays this defender was listed in coverage.

Distance (Dist): Average pass distance in the air on Targets (does not include Yards After Catch).

Success Rate: Percentage of Pass Plays that the Offense did not have a successful play. This includes Interceptions, Incompletes, and short gains that do not meet the baseline for "success".

Adjusted Pass Yards (AdjYd): Average Yards gained on plays with this defender listed in coverage, with a slight adjustment for quality of the Wide Receiver.

Passees Defensed (PD): Total count from the game charters, not the NFL Gamelog.

Rank: These are the ranks for the various stats. There were 83 Conerbacks that made enough Plays to be ranked, and 78 Safeties ranked (FS and SS lumped together).

DVOA: The majority of the ratings featured on FootballOutsiders.com are based on DVOA, or Defense-adjusted Value Over Average. DVOA breaks down every single play of the NFL season to see how much success offensive players achieved in each specific situation compared to the league average in that situation, adjusted for the strength of the opponent.

Ok, with that out of the way, we can begin with "the one who got away" – Domonique Foxworth. His numbers in Run Support were decent, but he was outstanding in Coverage last season: he had a 62% Success Rate (#10 for CB’s) and his AdjYd was 5.1 (#5 for CB’s). That means the few times he was giving up completions, he was stopping the WR for very short gains. But there have been several players who have had fluke years (good and bad) in the charting numbers. He had mediocre numbers as a Nickle back in Denver in 2007 (he was actually replaced by Karl Paymah during the year – who? exactly!), and the Broncos gave him away for a 7th Round Draft Pick last year, so I’m of the opinion that Dimitroff did the right thing by not trying to beat Baltimore’s offer (4 years, $28 Million). Here’s a reason for hope in 2009 without him:

Even with Foxworth, the Falcons didn’t fare well against the pass, but much of that is due to the poor coverage of the Linebackers. They were 28th in DVOA vs. Tight Ends, and 29th vs. Running Backs. Defense vs. Wide Receivers was closer to league average. 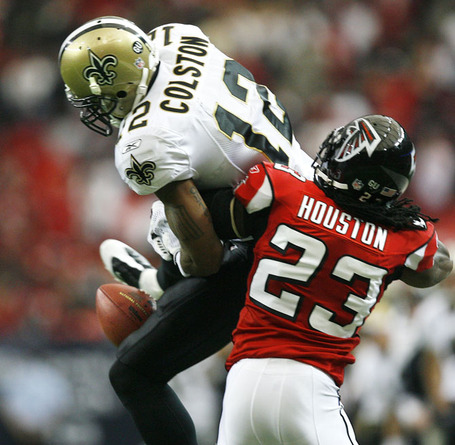 Now, for our #1 Corner this season – Chris Houston.

He improved over his rookie year in every area except one: Run Support.

Now, that may be because of a scheme change with the new coaching staff, or it may be an indication that he was unwilling to "stick his nose in there" (I do remember talk about him not being physical enough last year). That seems like bad news, but boy, do I have a lot of good news for you. First, a quote from Pro Football Prospectus 2007:

Rookie Chris Houston is incredibly fast and excelled in press coverage at Arkansas, but he’s short and inexperienced in zone coverage. DeAngelo Hall has shown it takes more than speed and athleticism to succeed as an NFL Cornerback.

It seems that he is gradually improving with his zone responsibilities. It’s easy to see this improvement in coverage, since his average Distance was 11.9 both years. He’s giving up fewer completions, and for fewer yards. He was #4 in the NFL with those 22 Passes Defensed – that could mean more Interceptions this year (he only had 2), or it could just mean he has "hands of stone, covered in butter". He got a PD on 23.9% of his Targets – a fantastic number. He was #18 in most Passing Yards Allowed in Coverage with 1,056 yards, but that was because he had a high number of Targets (with teams avoiding Foxworth). He was not in the Top 20 for First Downs, Touchdowns, or Yards After Catch Allowed. He also had the most Defeats (13) of any of the team’s Defensive Backs last year. I’ve got to say – I’m expecting pretty good things from Houston this year. 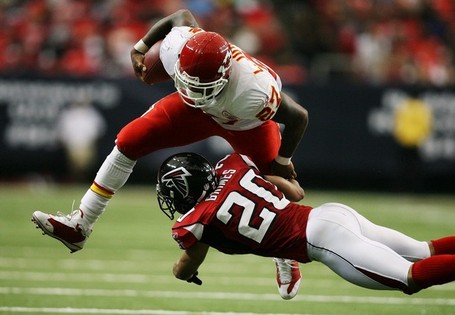 Next up is Brent Grimes. First, a quote from this year's book:

Started early in the season and showed he wasn’t ready for primetime.

His charting numbers are pretty much the opposite of Houston’s – he was fantastic in Run Support (#3 CB in RunYd, #5 CB in Stop Rate), but pretty awful in Coverage. He was in the bottom 10 in Success Rate, and only slightly better in AdjYd. Early word out of camp is that he looks great. Personally, I’d love to see him be used as the Nickle back, covering the quick slot receivers on (usually) shorter routes. I think he would be fine in this role. 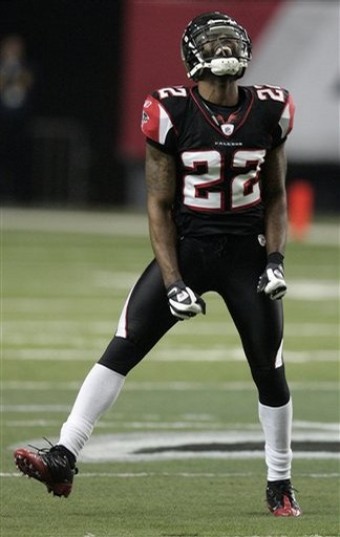 Now for St. Chevis Jackson: He is not actually ranked in any of these categories, because he was only listed as the man in coverage on 37 Targets (Grimes had 53 Targets, even though he only made one more "Play" than Chevis: 37 to 36). His numbers in Run Support look bad, but he probably only made a handful of tackles against the run. What is really interesting is his 44% Success Rate (better than Grimes, but still not that great) and his 6.5 AdjYd (which is fantastic, but don’t forget that the average Distance for his Targets was only 8.3, as opposed to 11-12 for the outside CB’s). He also had a good number of Passes Defensed (6) for the few Targets he had. He’s my favorite to win the other starting CB spot opposite Houston. I know he doesn’t have great straight-line speed, but as long as he gets Safety help over the top, he should be fine.

Next is Von Hutchins: I’ve already presented a bunch of his old numbers here. The only year he was on the field enough to rank in the game charting (2007 in Houston as a FS), he was equally terrible versus Run and Pass. Here’s the quote from last year’s book:

Houston’s backfield may have been worse than Atlanta’s last year, and the Texans didn’t put too much of an effort to re-sign him, which should tell you all you need to know.

Even considering his terrible performance on the field and his extensive injury history, it may (repeat: MAY) be worthwhile to keep him on the roster because of his versatility to play Cornerback and Safety. I’m just not expecting too much if he does get on the field. 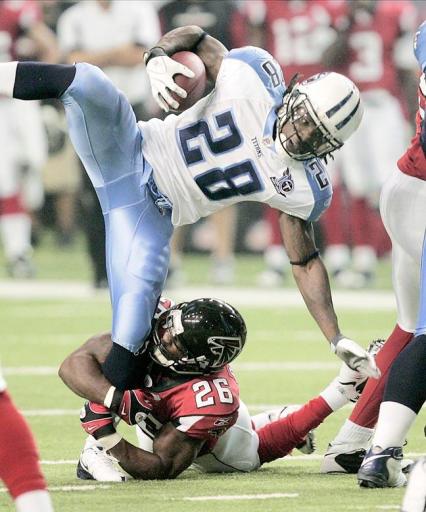 
Next, we move to the Safeties, with Erik Coleman. He was one of my favorite defenders to watch last year, and he had tons of tackles, but the game charting numbers aren’t too pretty: He was in the bottom 10 in RunYds and Stop Rate. That means a lot of his run tackles were cleaning up the mess after a gain of 10 yards. Obviously, the front seven was not doing a great job in the run game, and the scheme (Coleman playing deep Free Safety) wasn’t helping his numbers. Here’s another example – while in coverage, he was in the bottom third of Safeties in Success Rate and AdjYd; but his average Distance in the air was 15.3 (by far the deepest of the teams Defensive Backs). When you take that into account, his 8.6 AdjYd doesn’t seem too bad. His pass coverage numbers in 2006 for the Jets were fantastic, so we know he is at least capable (his run numbers were still pretty bad, though). He will be a solid contributor, and a veteran presence in a very young group.

As for the other Safety position, I don’t really know what to expect. Moore and DeCoud are going to battle it out in camp, but whoever wins is going to have some big shoes to fill. When looking at the game charting stats from 2006-2008, you can see a clear decline for Lawyer Milloy, but he was still very effective last year. He still made a huge number of tackles in the run game, and his advanced stats put him near the middle of the pack of Safeties (remember the deficiencies of the front seven). He also had much better numbers in coverage than I expected (I guess the Arizona game skews my memory), where he again was near the middle of the pack. From the numbers last season, there is actually more room for improvement from the Free Safety spot. Whether it’s Moore or DeCoud (or a little of both), they’re really going to have to hit the ground running for there not to be a drop-off from the SS spot.

Overall, these numbers seem pretty encouraging. Even though the pass defense was not great last year, the defensive backs seemed to perform pretty well. There is also a lot of room for improvement, with only Von Hutchins and Erik Coleman 27+ years old, of the major contributors.