Share All sharing options for: Roddy White Looking For A Big Payday 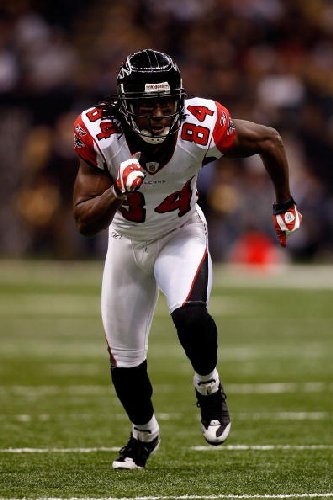 As Roddy White's holdout enters its third day, our old friend Steve Wyche of NFL.com reports that the receiver is looking to land a fat new contract.

We knew this, of course. The Falcons aren't blind and Roddy had outperformed his current contract by some very tall leaps and bounds, so an extension needed to happen. It's what White might be asking for that makes this situation difficult to resolve.

According to Wyche, White is looking for money to exceed the Packers' Greg Jennings, who signed a deal worth $16 million straight up and up to $30 million with escalations for performance. You could draw enough of a talent parallel betweeen that two that a similar deal wouldn't hurt, especially if we locked up Roddy for three or four years. I can buy that, and if the Falcons have the cash and the inclination to tie in that much money to the guy, okay. I'm not looking to return to the dark ages of Peerless Price in this receiving corps.

Yet the possibility remains that Roddy's asking for money in the range of someone like the Cardinals' Larry Fitzgerald, which is flippin' insane. Fitzgerald exists on another plane of being from White, and he may very well be the best wide receiver in the league right now. For White to look for something like the 4 year, $40 million accord penned by Fitzgerald would seem to imply that he's one of the two or three best receivers in the league, which--with apologies to a guy who has been fantastic for us for two years--is not the case at all.

Here's a quick comparison between the two:

What further distinguishes these two is that Kurt Warner is also throwing the ball to Anquan Boldin, another great receiver, and Steve Breaston, an emerging talent. Matt Ryan is throwing it to Michael Jenkins, a decent #2 who is known more for his blocking than his catching, and Harry Douglas, who has a ton of talent but isn't being rushed along. For Fitzgerald to put up those numbers in that company is eye-popping, even if Arizona does do nothing but throw the ball.
So the point I'm making, I guess, is that White deserves a fat paycheck and will get one. The sooner he and his agent realize Larry Fitzgerald money isn't going to fall out of the sky, the sooner we can get this done and Roddy can go back to kicking butt like we all expect him to.
Your thoughts?