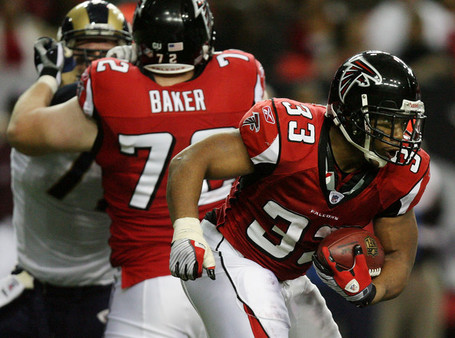 Continuing a trend of playing teams they beat last season, the Falcons will motor down to St. Louis to hopefully hand the Rams their collective horns. Look for the pitched battle for cornerback spots and wide receiver jobs to continue here, as well as hopefully better games from Jason Snelling and Thomas Brown, who are contending for the third running back job. Should be, at the very least, plenty interesting.

Join me for our usual rundown, won't you?

Weather? I don't know how to tell you this...but there's no weather in a dome. I'm sorry for any confusion this causes you.

Fun Fact? We're actually old division rivals with the Rams, which most of you probably remember. I'd come up with something more interesting, but it's the Rams. Meh.

Injuries? We'll be missing Chris Houston, which should give a lot of the young defensive backs a chance to shine.

Odds? Not applicable for those of us who are still reasonable people.

Foe? That'd be the fine folks at Turf Show Times, who I'm sure will love my comments about the Rams. Be sure to head over there and say hi during the game.