Share All sharing options for: Eric Weems Pushing Hard For A Roster Spot 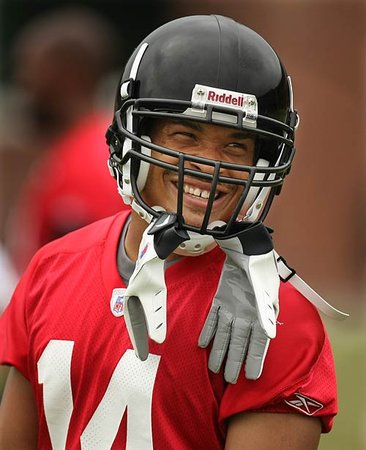 You may have noticed a trend around here. With the starters locked in at many offensive positions, some of the most interesting battles are occurring lower on the depth chart, so that is where my baleful eye has fallen. Today, I thought we'd examine a guy who I've mostly dismissed as a factor for a wide receiver roster spot, but can do so no longer.

I refer, of course, to one Eric Weems.

A little background. Weems has been with the Falcons in some capacity the last two years, exclusively as a practice squadder in 2007, and offers some clear value on special teams. He might be doomed to the cut list this season if not for the crushing injury to Harry Douglas, but with him gone the agile Weems is making a real push to assume punt return duties and perhaps more:

"I've been taking advantage of my opportunity because if one guy goes down, another guy has to step up," Weems said. "I've been trying to work hard every day catching punts before and after practice."

Glaring spelling errors in that article aside, "Weeks" looked pretty good in the first pre-season game. It doesn't hurt that he's actually relatively sure-handed for a guy you'd be carrying as a fifth or sixth receiver at best, and if given the opportunity to make the roster he'll likely only have unproven players and average veterans in front of him. This is Weems' one and perhaps only chance to captialize on this, so it's little surprise to see him working his tail off.

His primary competition for a return job and roster spot would seem to be Chandler Williams, who was solid in his own right and like Weems is trying to prove his worth on special teams. The deciding factor here could be what the two offer as a wide receiver, and if it comes down to that, I do believe Weems offers more value.

Where do you stand on Weems, Chandler Williams and the roster spot battle of aught-nine?