John Abraham And The Pursuit Of A New Contract

Share All sharing options for: John Abraham And The Pursuit Of A New Contract 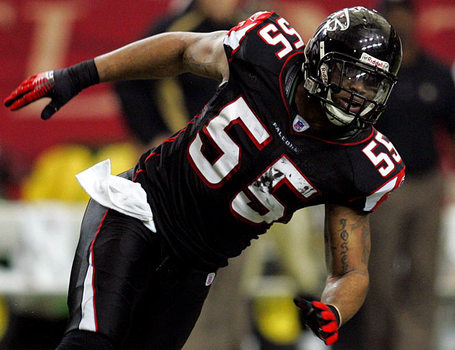 So word out of our good friends at Rotoworld is that John Abraham might be looking for a new contract. On its surface, this seems like a no brainer. After all, the guy's a Pro Bowl talent, doesn't make trouble and can unhinge his entire jaw to swallow a hapless quarterback. Easy peasy.

"Not so fast!" I shout. We all love Honest Abe, but there's a couple of small matters which might impede this contract-giving that I just hypothetically rushed into. First off, Abe's 31 years old, which is far from ancient. Still, he's had a history of nagging injuries and isn't a good bet to remain healthy and effective for five more years. I'd love it if it happened, but I'm a little skeptical. There's also the small matter of how much money he's going to want, and Rotoworld's pie-in-the-sky speculation is that he might want Jared Allen money, which is waaaayyyy too much for basically anybody.

Really, if Abe wants an extension, I can't quibble with that. The team could do worse things with its money than keep around one of its most effective players, increasing stockpile of defensive ends be damned. He did account for about 99.9% of our sacks last year, after all. But if it's going to cost an enormous amount of money to keep him--or if he manages to rekindle some of those unpleasant injury memories--it just shouldn't happen. Everyone has a reasonable price, even the grand high devourer of pass throwers.