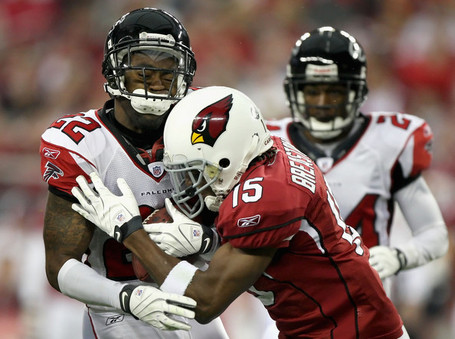 This particular post springs off of an excellent list of Falcons to watch, which includes one Chevis Jackson. Those of you who may be new to the site probably aren't aware of the depth of my faith in young Chevis. Some people are Jewish, some are Muslim, some are Christian, and Dave the Falconer just so happens to be a Chevisian. To say I think he'll do good things in this league is to severely understate the case I would make.

Simply put, Jackson's going to be a good corner in this league. Whenever he gets a chance to start, I see him locking down the job. I'm not ready to put the dude in the Hall of Fame or anything, but his interception return for a touchdown last year and his pick against the Cardinals in the playoffs is evidence of his big play ability. He's a canny corner with good instincts and the size to cover bigger receivers, though he's never going to be fast enough to keep up with true burners. Basically, what I said when we drafted him--that I expect him to become our #2 corner sooner than later--is still accurate.
Because he's not a big name and he's still got a training camp battle in front of him, I'm anointing Chevis Jackson the official sleeper o' this here blog. By the end of the season and likely before, I expect he'll be doing some pretty impressive things opposite Chris Houston. I'd bank my reputation on it, but first I'd have to have one.
How about you, dear readers? Got a sleeper of your own?