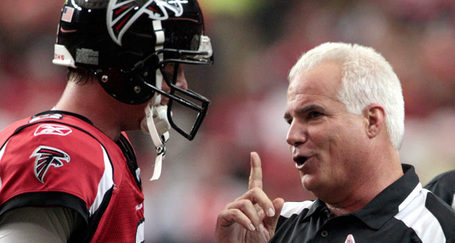 Too often I find myself poring over numbers, stats, and the ever-dire historical record in order to make an estimated guess at what the future may hold for our Dirty Birds. Many of you, especially some of the older members, lament the fact that I seem to balk at, if not completely ignore, the intangibles. Things like "will to win" and "high morale" and "team-centric play" do often miss my notice. This fault is one I am trying to get over and I present this post of (stat free) observations as a means of therapy. After you’ve given it a read, help me with some observations of your own.

When Matt Ryan threw his first ever NFL pass (a touchdown, for the uninformed), he ran more than half the field in order to jump on the back of one of his teammates. How the beanstalkian QB managed to fell an OL, I’ll never know. Regardless, his display was impressive and not just in the statistical sense. Yes, a first-NFL-pass-for-a-touchdown is quite the feat, but what Ryan showed us that day was that he was willing to share the spotlight with his team. His humility was solid the rest of the season. Level headed and calm, Matt presented the perfect archetype for the rest of the team. Stay humble, stay calm, and stay hungry; and Matt Ryan is always hungry.

When faced with certain defeat in the Chicago Bears game last year, Matt Ryan entered the huddle, looked at the clock (which read 6 seconds left) and knelt down. He said to his offense, "We will win this game." When the huddle broke, Matt lined up behind center, hiked, made his reads, and found Jenkins at the boundry-line twenty-five yards upfield. Jenkins made the catch, Elam sank the field goal, and the Falcons went from losers to winners in eleven seconds.

The confidence and drive to succeed that Matt possesses is contagious. Had he entered the huddle nervous, sad, or stone silent that day, I highly doubt our Falcons would have won that game. Ryan entered that huddle radiating sheer confidence and the offense lapped it up gleefully. I can promise you that none of the players in that huddle doubted their rookie QB’s words in that moment. That’s why we won. Not because Matt threw a bajillion touchdowns in college, not because Jenkins had x amount of yards the year before; it was all undefeatable confidence and drive to win.

Let me reiterate: Matt Ryan is always hungry. In what has now become a famous episode amongst the sports media, Matt Ryan decided to voluntarily return to Flowery Branch after losing the night before to the Arizona Cardinals in a harrowing playoff game in order to study the game film and learn from his mistakes. Let me bold this: Ryan willfully chose to return to work on an off day in order to improve his play. What kind of example does that set for the rest of the team? A pretty darn good one, and with that sort of player helping to mentor our young draftees, try to imagine the kind of work ethic the greenhorns will have after months of simply being around the 2008 Rookie of the Year. It’s frankly kind of scary to think about.

It can be argued that wins on the field ultimately come from winning attitudes. Ryan is helping to instill a winning attitude with a team some would say has lacked such an intangible trait since the Super Bowl run. Well, that, and we have an amazing coach.

Mike Smith did something in one game last year that I will never, ever forget. In that solitary moment, I was forever endeared to Smitty. An opposing team player decided to lay a late hit on one of the Falcons right in front of the bench. The coach calmly walked over to the player, grabbed the man’s face mask, and pulled him down to face level. Smith then began bellowing all sorts of words I dare not repeat here in fear of Dave’s Mighty Banhammer ™. The player was half a foot taller than Smitty. Still, the coach yelled and yanked and yelled until a field judge had to break up the quarrel. Harvey Dahl, eat your heart out. Just not mine, please.

For more on the incident, I turn to MentallyMIA:

Mike Smith got in Antonio Bryant’s (that would be a big WR, not a little CB ; ) ) face during our rematch with the Buc’s after he was pushing Foxworth when both players were out of bounds and the play was long dead. The score was tied up, the tensions were high, our coach was calm and cool for the Falcons and rigid as hell to the any Buc that messed with them

Mike Smith represents what I believe a good coach should be: a down-to-player-level authoritarian who can, when riled, be absolutely vicious. He respects the players and they respect him. This levels the playing field where the players do not feel patronized by their coach and the coach never loses that sense of control over the team as a whole. The mentality is one of a team-oriented approach to the game, one where there can be stars but everyone is just as important as everyone else. Coach Smith is one of the leading causes of our team’s cohesiveness. If they respect their leader, they will surely respect themselves and be confident in their ability to perform as a whole on the gridiron.

But Smith is not just a face on the field. He’s a face for the entire organization. Just today, AF.com Editor J Michael Moore shared this through Twitter:

Coach Smith stopped by the marketing meeting to say hey and get a look at what's coming up. Love that Smitty is so involved and supportive.

Look for Smith to keep his job for a good long while. He is ingratiating himself with this franchise and I have no doubts about his sincerity. Again, here is an example of a team member (albeit administrative) setting a good example for the rest of everyone who wears the Falcons logo.

Gentlemen (and ladies, if present), I have argued today why I believe our Falcons can finally accomplish their first set of back-to-back winning seasons and I did not once offer a stat or record in defense. I offered what many call intangibles. Yes, they are linked to two very key pieces of the organization and yes, there are a thousand more I could list (Blank, Dimitroff, Falcons org as a whole) but at over a thousand words, I think I’m done for the day.

Now it's your turn. Share your thoughts and opinions in the comments below!