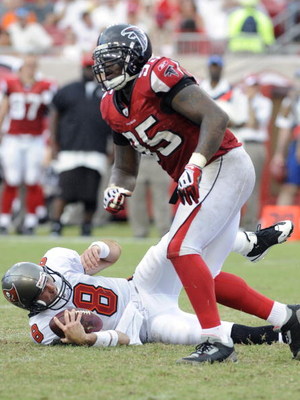 With rookie Peria Jerry likely lining up beside him, Jonathan Babineaux will be counted on this season more than ever before to provide value at defensive tackle.
One of the team's most unheralded players, Babineaux has been better than solid his entire career with the Falcons, off-the-field issues notwithstanding. It earned him a nice extension last year, and he's the only sure starter we've got on the interior with Trey Lewis coming off an injury and everyone else a potentially shaky option in the year ahead.
But that doesn't mean the dude's perfect. If life has taught me anything, it's that everything ever is a crushing disappointment. So there's that possibility that Babineaux will simply fade into thin air, however unlikely. Personally, I'd predict something in the order of 30 to 40 tackles, six sacks and a forced fumble.
As usual, this one's in your hands, though. Will Babineaux be boom-worthy or bustified in the season ahead?