Share All sharing options for: A Falcons 1st Round Draft Pick Retrospective (Part 3) 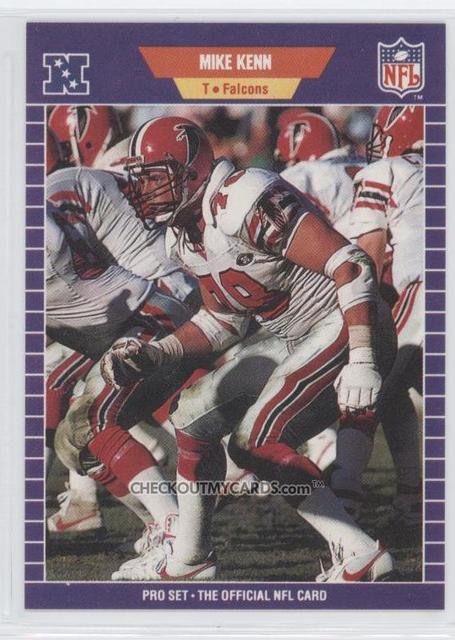 It's Thursday already? Man, the week is just flying by. Seems like only yesterday I was posting the TE nomination thread. Ah well, on to the next five first round draft picks. This next bunch features three out of five decent players which is batting above .500 (a fantastic Falcons feat considering their past blunders). Hurdle the jump to meet 'em.

Wilson Faumuina was drafted as a DT but tried his hand at being a DE as well. Unfortunately, it seems as if he was a complete bust. He spent five years in Falcons red, spending only one year (his third) as a full time starter. He left the league in 1981 and died of heart failure five years later. The brightest spot of his career seems to be an interception with a seven yard return in 1979. This could have solidified his starting spot in 1980.

A year later, the Falcons chose, in my humble opinion, the biggest asset to come out of this five year block of drafting. Mike Kenn has been lauded by many of you before. Let's laud some more. Kenn started immediately and never stopped. He started every single game he ever played, setting a franchise record. He managed to win the starting left tackle spot for seventeen years in a row before retiring. At age 38, Kenn was beating out much younger players. A player of his stamina and longevity surely made the Pro Bowl right? You betcha he did; five years in a row and he won 1st Team All Pro (AP) in 1980 and 1991. Expect to see him winning the vote next week when we choose the greatest Falcon OL of all time. He'll have stiff competition, but keep in mind...he would have probably won the starting roster spot against any other candidate.

The Falcons have a habit of alternating their first round draft picks between offensive and defensive players. That's probably why there's a pretty even split over the franchise's forty-three drafts. The Birds didn't buck that trend in 1980, picking up defensive end Don Smith out of Miami U. Don started for the team right away and spent six years with that lovely black falcon on his helmet. He generated some serviceable stats but never really made a name for himself. I certainly never heard of him before this week.

The next Falcon draftee is currently getting whooped by Alge Crumpler and Jim Mitchell in the Greatest Falcon TE of All Time poll. But Junior Miller wasn't bad. He was good enough to be sent to two Pro Bowls in a row (80-81) and generated some very good stats for a time when players, as many of our old-schoolers tell us, were less athleticly blessed. Here's what reader Tybeaux had to say about Miller:

He was the fastest tight end I ever seen. And was a good blocker also. Just think if we had used him like TE’s are used now? He would be a beast!!

Last on the list is Bobby Butler, a cornerback who spent his entire career with the Falcons. From 1981 to 1988, he started every game he played in. Overall, Butler serviced the Falcons secondary for twelve years but never earned a Pro Bowl appearance or otherwise made himself known to the annals of football history. Decent but not noteworthy. A good pick? Yeah, for a third rounder; we picked him in the first.

Tune in next week when we'll be looking at more first rounders' careers.