Falcons Ink DE Lawrence Sidbury, One Of The Steals Of The Draft

Share All sharing options for: Falcons Ink DE Lawrence Sidbury, One Of The Steals Of The Draft 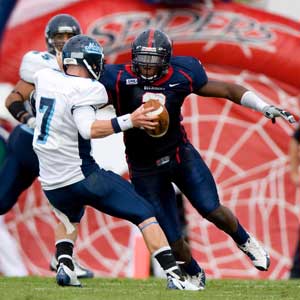 First off, a tip of my porkpie hat to tlozwarlock, who broke the news with aplomb this morning. I wanted to analyze this signing a little bit further, in large part because I truly believe Lawrence Sidbury could be something very special.

The unsourced Rotoworld report tells us Sidbury is getting a signing bonus of $441,000 and a four year contract in total, very reasonable numbers. What makes this signing so exciting for me is Sidbury's huge potential as a pass rusher and the simple fact that no one besides John Abraham on this defensive line really does much good in the sack and hurry categories. To get someone of his caliber in the fourth round is an incredible value, and it's good to see him locked up relatively early.

As I mentioned in his initial profile, I think Sidbury is going to push to play immediately, and if there are any injuries he has a legitimate chance to start in year one. With time, his superior motor and surprising strength may allow him to reach double digit sack totals, and it could be sooner than any of us think. The sky's the limit with El-Sid.

What are your eventual expectations for Sidbury?