Share All sharing options for: Arthur Blank Sells Shares Of Atlanta Falcon Franchise To Four Others 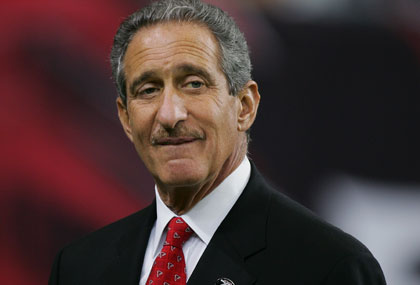 Whew, that was a lengthy title.

Intrepid reporter D. Orlando Ledbetter tells us that owner Arthur Blank has sold partnership shares in the Falcons to four others, which sounds like big serious business until you realize that he still controls better than 90 percent of the team's shares. It sounds to me as though Blank's just trying to ease his own financial burden a bit, and I'm fine with that.

This does give me a chance to revisit Arthur Blank as an owner. He caught a lot of flack for his seemingly preferential treatment of Michael Vick, a lot of which was justified. That doesn't change the possibility that we may see our first back-to-back winning seasons under his reign, nor does it change the fact that the hiring of Thomas Dimitroff as general manager was a masterstroke. He's sometimes been too visible and too involved in the team for the franchise's own good, but he also appears to have learned from that. As far as owners go, it doesn't get a lot better than what Blank's been able to do for a historically terrible team.

Still, it's interesting to see more names involved in the franchise so high up. Whether it has any actual effect on the product the Atlanta Falcons put on the field is debatable.