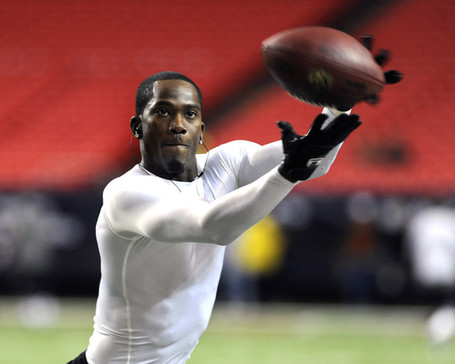 The previous news item on Harry Douglas wasn't good news, but it did get me thinking about my one of my favorite draft picks of 2008.
Douglas is a burner, plain and simple, and a guy who could offer a lot as a return man on special teams. With Roddy White and Michael Jenkins entrenched in front of him on the depth chart, though, he can't really move much higher on the depth chart without injuries or crippling ineffectiveness, neither of which I'm rooting for. That leaves his role pretty well set as a third receiver and contributor on special teams.


The real question is, will he do it well? He's still a young receiver and has done enough so far that I'm confident he will, but our roster has also been filled with late bloomers of late, so the best could still be to come for Harry. With Tony Gonzalez added to the stable of receiving options, however, it's possible he'll see next to nothing for targets. Personally, I'd predict somewhere in the neighborhood of 20 catches, 300 yards and a couple of TDs, plus a punt return taken to the house.
But you don't care what I think. What do you think?