Some Rain on the Parade: The Falcons Post-Playoff History

Share All sharing options for: Some Rain on the Parade: The Falcons Post-Playoff History

The Falcoholic consensus season projection lies somewhere between 9 wins, 7 losses and 109 wins, 0 losses. The most sought after milestone this season is not a NFC Championship or a NFC South win. No, most of us are looking for the coveted, ne'er before seen, back-to-back winning seasons from our beloved Birds. And we're pretty darn confident we're going to get that milestone, too. But let's slow down. Here's some rain for that parade, in chart form. 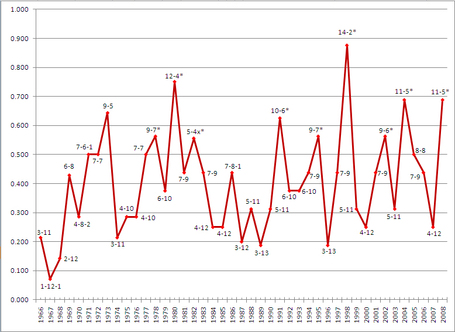 The chart's trend line paints a roller coaster ride only the strongest of constitution could stomach. Try to imagine the G's you'd be pulling going from 98's record to 99's. Who's reaching for the dramamine? Hurdle the jump to get on board.

Vegas would probably give 100/1 odds on the Falcons pulling this one off. Why? History is working against us, fans. As a matter of fact, history is leering at us from the safety of an adamantium bunker and all we have is a slingshot and a heaping of dreams with which to attack it.

Let's run down the records:

In 1978, the Falcons ended the season with a 9-7 record. They went on to win the Wild Card against Philly but lost to Dallas in the Divisional round. The very next year the Birds ended the year out of the playoffs with a measly 6-10 record. Not a monumental drop, but enough to keep the streak of on-again, off-again winning going (the best span of Falcons seasons ever occurred in the years 71, 72, and 73 where the Birds posted two .500 records and one winning season respectively).

1980 found the Falcons riding high. They ended the season with twelve wins and four losses, the best franchise season since its inception. Again, the Birds were in the playoffs. Unfortunately, so were the Dallas Cowboys. The Falcons lost the divisional round to the 'boys again. Tom Landry, victor of the day, remarked that the Falcons had every piece they needed to win a Super Bowl the next season. The Falcons decided to show the legendary coach up by posting a weak 7-9 record in 81.

1983 saw a strike but found the Falcons ending the season with a 5-4 reported record. This allowed them to sneak into the playoffs only to lose to the Vikings in the first round. A year later, the Birds again squeaked out a 7 and 9 season.

The Falcons would not see the postseason again until 1991, when they ended the year with a healthy ten wins and six losses. They faced off against the vile Saints in the Wild Card round and won. Then the eventual Super Bowl Champ Redskins knocked the Birds out of the sky in the Divisional. The very next year, the team posted the inverse record of six wins and ten losses.

1995 saw the Birds once again in playoff contention; however, the one that got away came to town and showed the Falcons just what they were missing. Green with envy, the Falcons took a nap in 1996 and ended the year at three and thirteen.

And then came 1998. The Falcons demolished the 1980 squad's record-setting win/loss by going an amazing fourteen and two. Dirty Bird fever hit the nation. It's just a shame John Elway wanted another ring before retirement. Despite losing Super Bowl XXXIII, many thought that the Falcons had finally planted the seeds for a long-running dynasty. Alas, fate, and history, caught up with our black-clad warriors. 1999 was the Falcons' Y2L (year to lose). And lose they did. They won only five out of sixteen contests.

In 2002, Vick was in full swing. He just about carried the team on his back into the playoffs, posting a 9, 6, and 1 record along the way. The Packers lost to us in the Wild Card (hah, eat that Favre!), but the now-long-standing Eagles curse came into being. Philly knocked us out of contention and took the wind from our wings. 2003 saw a piddling five and eleven showing.

Vick, after shaking off his Madden curse, brought the team back into the playoffs in 2004 by reversing the previous year's record. With the third best franchise season record (11-5) in their pockets, the Falcons steamrolled the Rams before running head first into a wall of Philly cheesesteak. The resulting concussion lasted into the next year, helping the Birds post its first dead even record since 1977. Not good, not bad, and not winning.

Things spiraled out of control after that and, well, here we are.

"But who, Warlock," I hear you asking, "were the men in charge during all of this?" Well, here you go: the same chart from above, only this time I've added every major coach's tenure as well as a green line depicting the winning mark of .501. It'd be a good idea to click on this image so it'll load in its full size. It'll add a good visual representation to what I'm about to say. 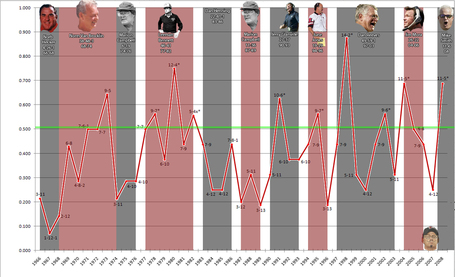 The Falcons have had very inconsistent performance from its coaches. One look at Dan Reeve's block is evidence enough of that. There are many factors that go into why a team that stays relatively the same can post such radically different records year after year. Part of it can be attributed with the NFL's habit of, as Nick Saban puts it, "punishing success." Every winning record on the chart above is followed by a semi-to-drastically steep drop off. Part of that surely comes from the increase in schedule difficulty after a team has found success. Such is the nature of a system that boasts parity.

Still, some teams somehow found a way around this (I'm looking at you, Patriots), even in this modern age of salary caps and free agency. The Patriots are a prime example of knowing how to spread talent around. They are a true team; one that can, even when its star player goes down, post a winning record. And that's exactly why Arthur Blank hired Thomas Dimitroff after only speaking with him through a web conference call. The Comrade is a graduate of the Kraft/Belichick school of football and last year's record shows that. With time and a few more drafts, the Falcons will have the same depth and talent as the Patriots.

And that's why Mike Smith will end his time as a Falcon head coach with the winningest record amongst the bunch. That's also why, despite all the bleakness above, I firmly believe our Falcons will earn their first ever back-to-back winning seasons in franchise history.

Now, if you'll excuse me, I have some Falcohol to drink.