Antoine Harris And The Grand Opening Of Injury Season

Share All sharing options for: Antoine Harris And The Grand Opening Of Injury Season 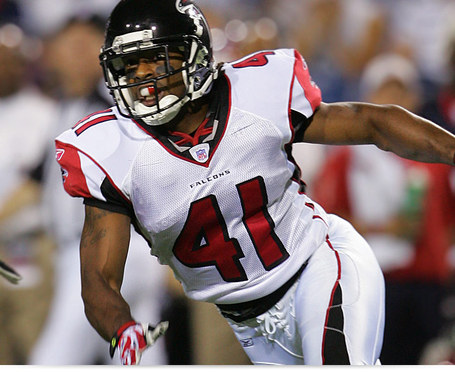 Minor surgical procedure, my foot. This is a harbinger of doom!

Antoine Harris is a special teams ace who offers little on defense, and he just had surgery. He'll be out until training camp, which wouldn't be such a big deal if he wasn't the first domino in a seemingly endless line of falling Falcons. Terror grips me!

Now that I've either frightened or confused you, let me make my point clear. Injuries in the NFL are extremely bad news for any number of teams, and the Falcons have lost some reliable performers in recent years. As a Falcons fan, I've learned to tolerate a great deal of shaz that would bring a lesser man to his knees, but injuries absolutely kill me every time. Look at poor Trey Lewis, who might be competing for a starting job this year if fate hadn't taken a hammer to him. By mentioning my overwhelming fear, I'm hoping to work some kind of reverse jinx.

The question for all of y'all (keeping y'all in health) is who among guys who missed significant time due to injury last year will emerge and wreak havoc upon an unsuspecting league? Will it be Lewis, well-known dinosaur and offensive lineman Sam Baker, or someone else entirely? Click and clack your way to discussion-based victory.