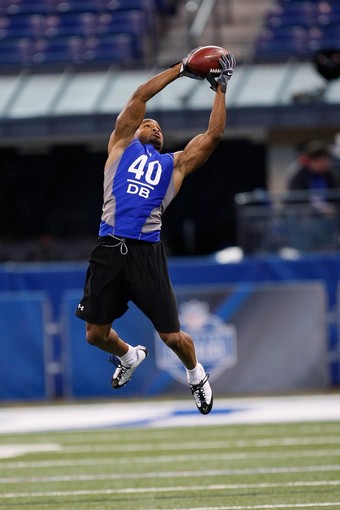 You call that a jump?
There's no doubt in my mind that Chris Owens is a physically gifted cornerback. Ironically, you may not see him leaping like that too often, at least if you listen to scouts. His draft position means he's got some believers in the front office, which never hurts. Owens has debuted thus far with a minimum of fanfare, so let's get him his dues.

Follow me after the jump--which given my knees will likely barely clear the ground--for more on Owens.

History: A three year starter at San Jose State, Owens was named 1st Team All-WAC in 2008 and 2nd Team All-WAC in 2007. Knocked down eight passes in 2008. Allowed only one touchdown in his last 37 games, which is impressive as all hell.

Pros: Both fast and quick, a distinction that everyone likes to make but nobody seems to understand. Has above-average speed and changes directions quickly. As his long stretch of college success indicates, Owens is a guy who always know where the guy he's covering is and will not let him go anywhere uncontested. Very high awareness of the game around him, as well. Good hands and capable of getting in on rushing plays when needed.

Cons: The most common knock on our cornerbacks is their size, and Owens is yet another short guy. He's a hair under 5'10 and 180 pounds, so your biggest wide receivers are going to be able to work him over a bit. For an athletic guy, Owens isn't a huge jumper, which does not match up well with his height concerns. Needs to work on his tackling form.

Role: The Falcons didn't draft Owens in the third round to have him sit on the bench, but I'm not sure he should be starting in his first year. I like corners who are good tacklers and can prevent a bad play from turning into a sure touchdown, and I'm not sure he's there yet. Owens definitely has excellent coverage skills and is a clear eventual starter for this team, but he'll be best suited locking down slot receivers in a nickel role this year. Injuries or general ineffectiveness could pave his way to a starting gig, though.

Final Thoughts: Owens was kind of a puzzling pick on draft day, but reading up on his coverage skills and wheels makes me feel a lot better about his role. He should get a crack at starting by 2010, but expect to see him plying his trade on special teams this year.