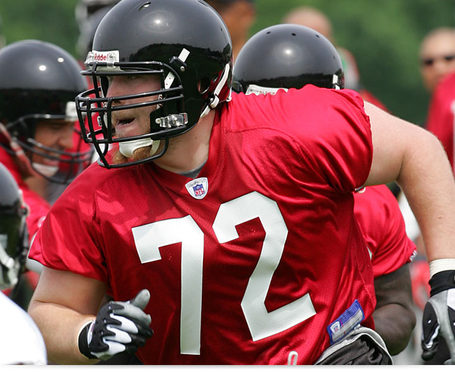 Calm down. That's not a bear leering at your untidy desktop. That's our own OT Sam Baker. I want you to project him. "Now wait just a darn minute, Warlock," some of you may exclaim. "He's an offensive lineman. They don't have stats to project!" This is true. As far as official league stats go, OTs generate two: Games Played (G) and Games Started (GS).
Baker started (GS) five games last year and played (G) in eight. As we all know, he decided to have surgery on the 29th of October to fix a herniated disc in his back. While Sam called it "minor surgery," it still kept a talented OT off the field for weeks on end. Even though he returned and played downs in the final three games of the season, the impact and momentum he had during the first few games was lost.
Measuring Sam's early impact on the team last season is essential in projecting how he'll do with a (hopefully) healthy and full season ahead of him. Take the jump with me as I break down his impact. Then grab your crystal ball and do some projecting of your own in the comments.

To measure Baker's impact, I looked at the play-by-play calls of the five games he started as the primary left tackle. I created three stats: Runs through LT, Run Yardage through LT, and LT Yardage Percentage (percent of LT run yards out of total run yards). Here's the breakdown:

Sam, a rookie OT, accounting for 27% of the run yardage in his five starts is somewhat phenomenal. He certainly proved he was worth the high draft pick. With Baker (fingers crossed) staying healthy this year, this stat should increase in the 2009 season.