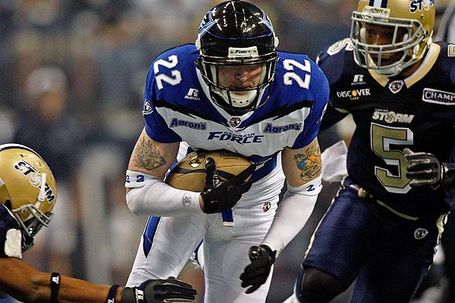 If there's one spot on the roster where one could argue there's an abundance of competition, that position would be receiver. The irony is that out of the seemingly hundreds of receivers the Falcons have signed, only one will win a roster spot, and that's as a likely inconsequential fifth receiver in an offense that utilizes two or three and a tight end most of the time.

While there were already a few guys on the roster who could compete, the most intriguing options are actually the undrafted guys from this year, which include Arena Football League talent Troy Bergeron, Clemson rookie Aaron Kelly and Utah newcomer Bradon Godfrey. Unrookie Chandler Williams has a chance to stick around because he's a clear asset on special teams, while Khalil Jones probably won't win a spot unless everyone else on the roster suddenly takes up water polo. It's the undrafted guys or bust in this case.

Without further ado, let's take a quick look at each of these guys, as well as my wildly irresponsible prediction about which one of them will make the final roster. Here's a hint. If you've been reading for at least a month, you're going to know who I pick.

So that's my opinion. What's yours?