Share All sharing options for: The Dirty Bird Reigns Supreme 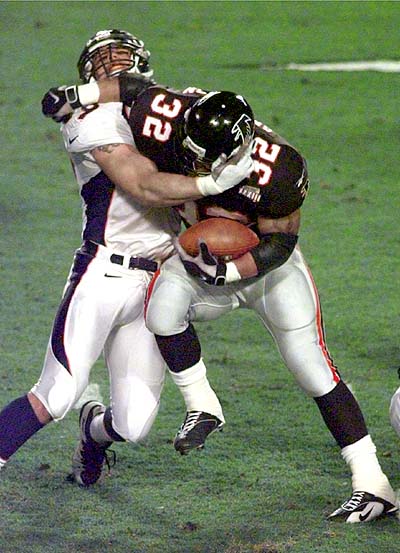 Want to get an elbow to the face? Just try dethroning Jamal "Dirty Bird" Anderson after his sweeping victory in the Greatest Falcon RB of All Time race. His closest competitor was William Andrews, who wound up in second with a measly 26% of the vote. With a whopping 47% of you blocking for him, Mr. Anderson runs this one, completely untouched, all the way to the end zone.
Now we get to choose our fullback. I have three candidates in the poll. Their stats are past the jump.

I must say I knew close to nothing about any of these players. To help me (and you) out, I've included their tenures with the team. I'm going with Dave Hampton because he accomplished more in less time than Bob and has a better ground game than Cannonball (though, had Butler stayed another year, their rushing stats would probably be nearly identical).