Share All sharing options for: A Falcons 1st Round Draft Pick Retrospective (Part 2) 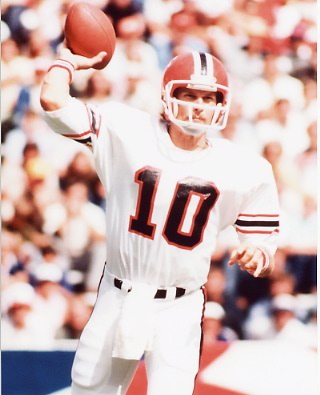 Another week, another five first round draft picks to examine. As the above image suggests, this batch of picks includes the iconic Steve Bartkowski, who also happens to have been voted best Falcons QB ever. Is Bart the only highlight in a dark period of draft blunders? Find out after the jump.

In 1971, the Falcons chose running back Joe Profit. Profit was a bust of mega proportions. In his three years as a Falcon he only generated 197 yards (3.4 yds a game) and 3 touchdowns. The Falcons did not, ahem, profit from taking Profit, especially so high in the draft.

A year later, the Falcons took a different approach and drafted a defensive player as the 15th overall pick. His name was Clarence Ellis. At 5'11" and 193 pounds, Ellis made for a relatively short free safety. Clarence never started a game in his three years in the league (add another bust to the list) but his stats, at least for a non-starter, aren't terrible. Ellis picked the ball off eight times in his career, amassing 140+ INT RET yards while he was at it. Not terrible. Not good. Just so-so. C'est le football de Faucon.

So what happened to the picks in 73 and 74? Well, according to Wikipedia, in '73, the Falcons traded their first round pick to the Oilers for defensive lineman Mike Tilleman. While Tilleman was huge (6'7", 275), he does not seem to be well remembered. Pro Football Reference has vague stats at best and as far as any site is concerned, he's a drop in the bucket. While I don't know how he played (and wouldn't, seeing as I was not born), I will say that I think our Birds should have stuck with the draft pick.

In 74, the Falcons traded their first round pick along with QB Bob Berry to those wacky Norsemen (who had once had Berry on the roster in the sixties) in Minnesota in exchange for, get ready for it, Punter-cum-QB Bob Lee and LB Lonnie Warwick. Was it a good trade? Let's find out. Bob Lee as a Falcon generated a 49.3 passer rating, throwing 13 touchdowns and 22 interceptions. Warwick never generated any stats in his two years as a Falcon. I take that back; he did recover a fumble.

And now, introducing your own elected greatest Falcons QB of all time, Mr. Steve Bartkowski!  You know his stats already and you guys voted him the best QB in all Falcon history. Need I say more? Well, how about he's the sole reason we shipped Bob Lee back to the Vikings. How about the fact that he was our first Matt Ryan? Ok, so not exactly. He did, however, start the moment he donned a gameday uni. While he did not have the instant success of our Offensive Rookie of the Year, he did spend ten years in Falcon red and was the main driving force behind the amazing twelve and four 1980 season. But then he fizzled, as most QBs eventually do. He piqued around the mid point of his career (1980 and 81, both Pro Bowl years) and then faded off into the past, replaced by...eh who cares. They weren't him.

1976 brought in Bubba Bean and, despite his ridiculous name, I'm sure he made quite an impact on our Birds. Well, he was pretty...average. Again, c'est le football de Faucon, eh? The stats are here. Long story short, he earned a starting job a year after he was drafted and played admirably first as a fullback and then as a feature back. He then left the league for greener pastures. I'm assuming he's either selling insurance or cars. Or boats; to sail on, with flippy floppies. Update! According to orang3b and this link that he provided, Mr. Bean is the proud owner of a construction company.

Last on this blundering bill of benign but barely bearable ball brawlers is Warren Bryant. Drafted in 1977, Bryant joined the Falcons offensive line corps immediately. With no real stats to look at, I can only assume that since he started 92 of the 104 Falcons games he played in and his career with the Birds spanned 7 years, he was serviceable if not decent at his job.

Tune in next Thursday when I'll be putting five more first round draft picks under the microscope. Until then, au revoir!