Spencer Adkins And The Importance Of Projects

Share All sharing options for: Spencer Adkins And The Importance Of Projects 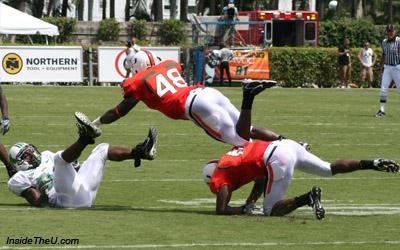 So by now you've heard that the Falcons signed Spencer Adkins, a sixth-round pick at linebacker in this year's draft. Adkins offers something that arguably no one else in this draft class does though, and that's a near-mythical project status.
When you think about it, the Falcons mostly drafted guys who are ready to help somewhere right away. CB William Middleton and DT Vance Walker can provide depth at their positions, while OT Garrett Reynolds could actually compete to start in the near future. Our higher round picks will have positions on the depth chart locked up and are safe bets to contribute in some form in their rookie seasons. Adkins isn't like to see the field for the first several weeks of the season, and then it's likely to only be on special teams.
Normally, a guy like that wouldn't even make the team in the first place, but Adkins has a lot to recommend him. He's got game-breaking speed for a linebacker, a solid tackling technique and....well, that's really it. The coaching staff will have to do some molding to turn his physical tools into on-the-field success, but I believe in the talent. Clearly, Thomas Dimitroff does too.

Perhaps even more important than Adkins is what the linebacker represents. Teams which get in the habit of drafting the sure thing regularly sacrifice potentially superior talent for steadiness. That's not a bad thing, per se, but a team of average to slightly above average players rarely goes further than the first round of the playoffs. Especially late in the draft when you're practically spelunking for talent, swinging for the proverbial fences makes an awful lot of sense. Guys like Adkins represent the outside chance that you can turn lead into gold, and it's a great way to fill out a roster.
How important do you think projects are for an NFL roster?