Share All sharing options for: Discussing FB Ovie Mughelli's Role In The Offense 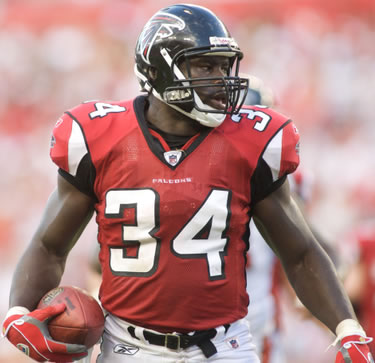 Ever since I covered Ben Hartsock's somewhat overlooked role in the offense, I kept having the feeling that I was forgetting someone else. Turns out, it's probably the least discussed Falcon on offense since he signed his deal under Bobby Petrino. That's right, our topic for discussion on this Sunday afternoon is the man, the myth, the legend, Ovie Mughelli.
One of the best blocking fullbacks in the league, Mughelli is a key piece of the Falcons' potent ground attack who goes somewhat unheralded running in front of Michael Turner and Jerious Norwood. He's also the highest paid fullback in the league, which means he darn well better be doing a good job.
Your topic of discussion, should you choose to accept it, is what kind of impact Mughelli really has on this team and what he's likely to do in the year ahead. How critical is he to the running game? Will he do any short yardage work in 2009? Is Ovie Mughelli one of the coolest names in football?
It's all in your capable hands, friends.