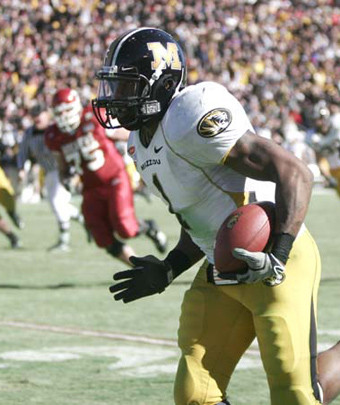 I could think of no more appropriate nickname than "C4" for William Moore, considering that everyone who talks about him talks about how he blows people up.

We heard it from Thomas Dimitroff, we heard it from scouts, and fans who saw him play in college, such as MarioVanPeebles Republic of China at Rock M Nation. Clearly, he's a tackling safety of the highest order. We've heard a lot more about Moore than some of our other picks, but let's take the time for a belated introduction, shall we?

Join me after the jump for more on our explosive safety.

History: A two year starter for the Missouri Tigers, Moore was an effective player who battled a variety of unfortunate injuries through his college career. He was a 2nd Team All-American in 2007, when it looked like he'd be a high first round pick if he left school. Honoring a teammate who passed away by wearing his number, Moore has a reputation as a down-to-earth and good guy.

Pros: Has the kind of strength and physique necessary to hit running backs, wide receivers and tight ends with equal force. Fantastic tackler who plays the run about as fiercely as you possibly can. Excellent lateral movement and surprising quickness. Can make a pick every now and then with above average hands and decent awareness. Potential team leader.

Cons: Moves well side to side and is quick, as previously mentioned, but lacks top-flight speed. Very aggressive, sometimes to his detriment. Instincts against the pass are not as good as they could be. After his college injuries, Moore has to have a question mark placed next to his durability, which is a concern.

Role: I'd frankly be surprised if Moore wasn't bringing his tlaent to bear on some unfortunate souls from the start of the season. The Falcons didn't pick him up to sit unless he performs at a level significantly below Thomas DeCoud this summer, and he's such a force against the run already that he makes sense at strong safety. I fully expect him to get a ton of snaps and potentially factor in on special teams, if Mike Smith is willing to get him on the field for that as well. I see a very bright future for Moore, who could be a decade-long starter in the NFL if he steers clear of injury.

Final Thoughts: Moore seemed like a good pick at the time and nothing that's happened since has changed my opinion. I'm still a big DeCoud fan, but there's no denying that Moore offers considerable upside and has the support of the regime. I think it's fair to cautiously expect some very good things from Moore, especially with a defense that should be a little bit better overall than it was last year. Here's to the future!