Share All sharing options for: A Falcons 1st Round Draft Pick Retrospective (Part 1) 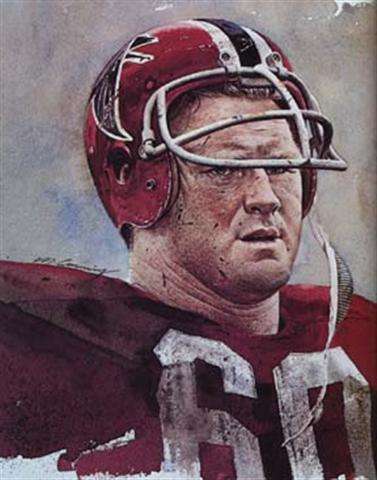 A few days ago, a coworker (a Bears fan; that'll make the week of October 18th a fun one at the office) started listing off the Chicago Bears first round draft picks from 1970 onward. Suffice to say, I was dumbstruck. Here was a fan that not only knew the names of forty or so players, but their immediate and lasting impacts (if any) on the team as well. And he did all of that off the top of his head.

The encounter got me thinking about the Falcons' history in the draft and what sort of information I could gleam from looking at each first round pick from '66 onward. Follow the jump for a nice, yet relatively dismal, history lesson.

For this post, I'll focus on our first five 1st rounders, which also encapsulates the first five years of the Falcons' existence.

The combined win/loss record for this five year block is horrendous, especially considering the big names in the above table. Mr. Falcon, Claude Humphrey, and George Kunz are all players that were heavily vetted during our Greatest All-Time Falcon posts. However, these three great men do not a football team make. At least with an expansion team, losing is a given the first decade or so.

I don't plan to reiterate just how awesome Mr. Falcon was, but let's take something into account. His play during his rookie year was on another level. He turned in amazing performances despite the surrounding team's talent level (or lack thereof). Check these numbers out:

So where was our offense that year?

Squarely in the hands of Randolph Klaus "Randy" Johnson, a 4th round AFL draftee that lucked out when the Falcons used their second pick of the first round to hire this Texas based quarterback. He was our very first field general.

And he was awful.

What's interesting about Mr. Johnson is his RUSH TD stat. In '66, he had 4 TDs on the ground and 142 yards rushing. For the next four years, he had at least one rush TD and between 50 and 140 rush yards. Scramble much, Randolph? Oh, and he fumbled 13 times in '66. That's nearly one a game.

Sidestepping Mr. Johnson, we move to Claude Humphrey, perhaps (if you guys nominate and vote for him) one of the greatest defensive ends to ever wear Falcons red and black. In fact, if the people in Canton ever get their act together, he could be one of the best DEs to ever suit up in the NFL. But that's another matter.

Mr. Humphrey was amazing. Despite a limited record of his stats for 1968, he was so good he earned the AP Defensive Rookie of the Year award. He's got 126.5 career sacks, most of them earned as a Falcon. If anyone has his stats for 68-70, you will own this spot in the article.

Now to George Kunz, a relatively unknown name but one that earned a lot of honors as a Falcon. Kunz was a Pro Bowl pick the very year he was drafted, and continued to play on a level that kept Falcons QBs safe from defensive uglies. Too bad he couldn't save them from their own lack of ability. It's easy to imagine that the Falcons' administration viewed Kunz as the solution to their spotty quarterback play. Kunz helped keep Bob Berry, Johnson's successor, safe enough to earn a 106.5 QB rating for 1970.

Also in 1970, the Falcons drafted linebacker John Small. At 6'5" and 260 lbs, he didn't quite live up to his surname. He did, however, leave a very small footprint on the team and, subsequently, the league. The only stat I could pull for Small was a 12 yard kick return in 1971. He spent 3 years with a Falcon on his helmet and then moved on to the Detroit Lions, where it is assumed he sucked even more.

Check back next Thursday, where I plan to study the next five year block of draft picks. As always, share your opinions, stat corrections, and knife-sharp wit in the comments.