Share All sharing options for: The Great Turner/Norwood Debate 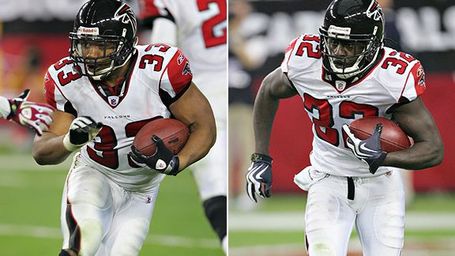 Despite four power outages and two data losses, I've finally managed to get this post up -- Warlock

The Falcons are, in a word, stacked at the running back position. Dave and MentallyMIA have touched on how powerful our backfield is and I'm in complete agreement. The Falcons are so stacked that arguments have arisen over who is the better back: Norwood or Turner. I'm going to dump some gasoline on that fire and present you guys with some observations I've made from their 2008 season stats. I may be reaching in some cases but it's an interesting study to make. Follow me over the jump and we'll get into the nitty gritty numbers.

First, let's look at Michael Turner's year. Turner's average gain per attempt in 2008 was 4.5 yards. His average yardage per game was 106 yards. Split that average game yardage by his 377 season carries and you get a 28% gain rate for the Burner. That's not bad. Now let's take his 1,699 total rushing yards and divide them by his 17 touchdowns. The Burner scored a touchdown every 99 yards. I'd call that very productive considering that his average yards per game is 106; that's at least a score a game. This means that 4% of his carries scored.

Norwood's stats look a bit different. He ended the year with 5.2 yards gained per attempt, eclipsing his Touchdown Vampire cohort. Jerious didn't see the ball much with only 94 attempts and 489 yards. Per game he gained only 30 yards and scored only 4 touchdowns on the ground the entire season. He winds up getting a 32% gain rate. Looks better, right? Well, let's take his scores into account. His score rate is actually the same when considering his carries. He scored 4% of the time he touched the ball. He did, however, take nearly four times as long to score. Norwood scored every 120 yards; with a per-game average of 30, Jerious had nearly four games between scores.

The argument is therefore whether or not, given equal amounts of carries, Norwood could equate or better Turner. If my above observations stay true this season (they won't) and Smitty gives them 200 carries each (he won't), the stats break down thusly:

Of course, you can't have seven-tenths of a touchdown. Rounded, both runners have the same amount of touchdowns, with Norwood eating up more yardage between the posts. Norwood's superfluous 140 yards would be pure gain for the offense. That's 14 extra first downs for the offense.

These figures do not take into account maturation and fatigue. They also are not predicators. They are simply last year's numbers used in an interesting way. I am not meaning to say that Turner and Norwood are equals. I am, however, convinced that Norwood is on his way out of Falcons red. He could make a team looking for a feature back very happy in the near future and the organization probably won't be willing to pay full price for two feature backs.

As for this season, I'd like to see Norwood with the ball more, especially in need-to-gain situations. Turner is a bruiser and finds the endzone quicker than my Tom-Tom finds traffic jams.

For those visual readers out there, I've compiled some charts using StatPlot.com to help further this study.

This chart illustrates Michael Turner's Attempts and Total Yards per game. First notice the roller-coaster like nature of the yards gained. Notice too how his attempts are fairly even the entire season. What's most promising though is the general upturn of his big games. Pretend the Detroit game didn't happen and then draw a line between the all the big games. Every big game got bigger and bigger as the season went along. This points at two things: the ability of Turner improving and the maturation of the relatively young OL we had last year.

Next we take a look at Norwood's Attempts and Total Yards per game. While the lines stay far apart over the first half of the season, they get closer and closer (eventually crossing each other) before picking back up again. Since he's getting nearly the same attempts per game, this may reflect player fatigue. Norwood, unlike Turner, did not keep a up/down pace but rather stormed out of the gate, tired, and then recuperated.

Here I've pitted Norwood and Turner against each other to see who has the better explosive play count. As you can see, 75% of the time, Turner owns the longest play of the game. Turner scores a lot in a short amount of yardage, so it makes sense that he would be the more explosive player.

This chart compares Norwood and Turner's yards-per-attempt averages. Norwood wins on this one, having a much higher yards per carry stat. This does not mean Norwood is more explosive, it only means that Norwood, when used, gains more yardage between the line of scrimmage and the first down marker.

It's safe to say that this is not an easy debate to take sides on. On the one hand, you have Michael Turner, endzone-capturing expert. On the other, Jerious Norwood, yardage gobbler. Picking between the two would be very difficult. If forced, I'd have to say Michael Turner. I'll take scoring over ball control in almost any situation. That's just the type of fan I am. Like it or loathe it, Turner has a minute edge over Norwood in scoring speed.

Enough of my yammering. Get to commenting! Oh, and vote too, if you want.

UPDATE: Thanks to reader TomQ for the inspiration. Let's look at each back's median Yards Per Carry. This will help highlight their YPC on "normal" plays. With the explosive plays out of the equation, Turner has a median YPC of 3.8 while Norwood carries a median YPC of 4.1. This new revelation gives us a better picture of the debate and helps sway the argument towards Turner, at least in my opinion. Here's a chart. 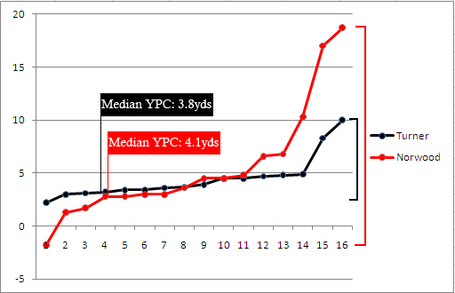 Norwood's media YPC may be higher but his trend spread is way off the charts, going into the negatives. Turner seems much more consistent on his game-to-game performance. Norwood's inconsistency, as TomQ predicted, is highlighted when we calculate their median YPCs.

That settles it for me. I'll take consistency and scoring. Turner it is.