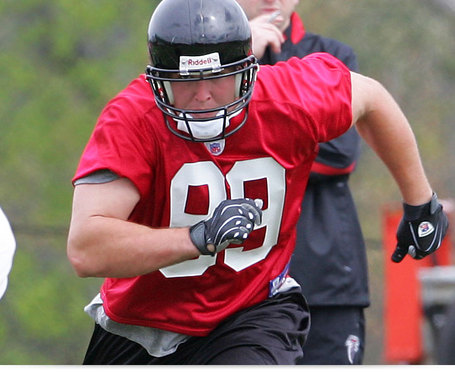 There's no doubt in my mind that Tony Gonzalez is going to be the best tight end on the roster in 2009. He's got that Hall of Fame caliber set of hands, quality blocking skills and well-documented love of winning. We'll be talking about him all season, so I'm going to go in a little bit of a different direction today. Let's talk Ben Hartsock.

Hartsock, as you remember, was the former Tennessee Titan who the Falcons brought in to help with blocking. The dude might as well not even have hands for all the catching he does, but there's something undeniably appealing about a player who is good at exactly one thing and goes out there and just does it. Hartsock is to blocking what an idiot savant is to mathematics, and it showed on the field last year. He had three catches and served as essentially an extension of the offensive line, albeit one that can move around a bit. What he brought to the team was an additional accomplice to springing Michael Turner for huge gains and a guy who could put the brakes on an overzealous rusher hoping to get to our prized quarterback. It was his only role, and he proved time and time again that he's one of the best pure blocking tight ends in the league. With his obvious receiving skills and his status as an offensive weapon, Gonzo isn't necessarily going to be asked to do the same thing.

My point is that there's still plenty of room for Hartsock to have an impact this season, and I wouldn't be surprised to see the Falcons deploying more two tight end sets to get Ben on the field. Mike Smith values blockers--as is evidenced by the extension given to WR Michael Jenkins, an above average receiver who chops and hacks with the best of them--and Hartsock will only make everyone else's job easier. In my mind, he's the most underrated piece of the offense, and given his tendency for quiet days on the stat sheet, that's not likely to change. I'm glad to have him aboard.