Share All sharing options for: A Very Falcoholic Discussion: Your All-Time Favorite Falcon 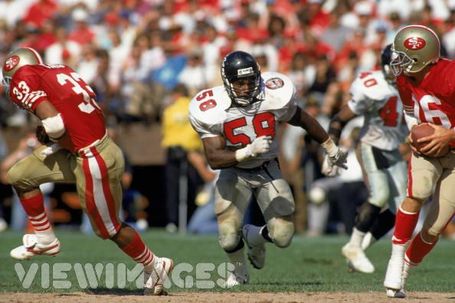 I first saw Jessie Tuggle play football in 1990, when I was six years old. I couldn't tell you the game if I had a gun held to my head, but it's hard to forget Tuggle. The dude looked like he was chiseled out of granite, with a helmet and pads thrown on for good measure.

This was a man they called "The Hammer" because his hits were so bone-jarringly solid, and for a skinny kid with tendinitis in both heels and no real shot at a football career, there was no more awesome sight than watching Tuggle smash into someone like they just stole his life savings. Considering I really became aware of football and the Falcons only shortly before, it's fair to credit Tuggle with a substantial chunk of my early fandom.

He was--and still is--my favorite Falcon. I had an inexplicable fascination with J.J. Birden, couldn't help but love Jamal Anderson, spent a lot of time tracking down a Keith Brooking rookie card and shared my love of what Alge Crumpler brought to the team with many of you here, but none were the equal of Tuggle. Right now, it's hard for me not to love Curtis Lofton, to imagine that he might be the second coming of my favorite linebacker. No matter what happens in the years ahead, though, I can't forget what it was like to sit in front of that old Hitachi television and watch Jessie Tuggle play the game. I was in high school when he retired, and I remember wondering aloud to my friends what it would be like to watch the Falcons play without him.

So here's my question to you, fellow Falcoholics. Who is your favorite Atlanta Falcon? I'd like to hear you justify it, but it doesn't take stats or a particularly great anecdote to convince me. Sometimes it's the smallest thing in the world, but those are the things that stick with you all of your life. I'm especially interested to hear from folks who have been watching the Falcons play since their inception, as my memory obviously doesn't extend that far back.

I'm looking forward to reading what y'all have to say.