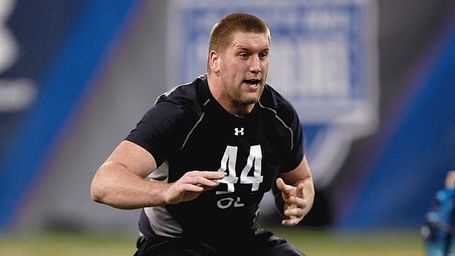 The Falcons could use a young mauler on the right side of the line, and you might just be looking at him.

Reynolds is a big dude, no doubt, but it takes more than size to succeed at the NFL level. Does he have the necessary skills to stick with the Falcons and potentially start?

Join me after the jump, and you just might find out.

History: You may have heard of his uncle, Jack "Hacksaw" Reynolds, who carved out a 15 year career as a linebacker in the NFL. Garrett Reynolds knocked more than a few defenders on their asses during his time at North Carolina, two and change of which he spent as a starter. Had a very good reputation as a pass blocker at the school despite questions of his athleticism. Was a communications major, which makes him at least as qualified as me to write this here durn blog.

Pros: Unlike our good friend Sam "T-Rex" Baker, Reynolds has long arms and the kind of frame you like from a space-eating tackle. No one's ever going to accuse Reynolds of not being aggressive enough, and those who take him lightly will end up out of the play. He should give the team a big boost when it comes to opening up space for runners, and he shouldn't have any problem giving Michael Turner and Jerious Norwood some breathing room around the edge.

Cons: Athleticism is the concern that comes up again and again. Instincts are not said to be as strong in the passing game, and a lack of mobility and so-so footwork complicates that problem. The concern is that pass rushers can just go around him. I don't see the same problems with strength that some do, but it can't hurt to make sure he can handle the bigger dudes coming at him.

Role: Reynolds is likely to be brought along slowly his first year and may see some action as a backup to Tyson Clabo. With Sam Baker likely healthy and with his limitations, he's never going to challenge for a big role at left tackle. I don't expect him to get any starts in 2009 unless someone else goes down, but he could actually contend to start in the future. He's someone to keep a close eye on.

Final Thoughts: This whole profile probably sounds more harsh than I intended, because I really do think Reynolds could be the starting right tackle for the 2010 or 2011 version of the Atlanta Falcons. There are real concerns with the athleticism and his role in the passing game, though, that will have to be addressed before we get to that point. Like fellow project Spencer Adkins, he may sneak up on you sooner than expected.