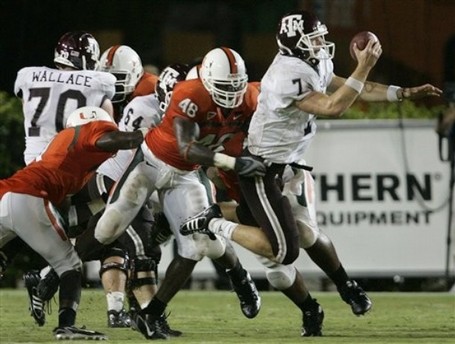 I imagine getting hit like Spencer Adkins is a little bit like being smashed by a meteor. Put more eloquently, it probably hurts.

Adkins is an athlete, pure and simple, and from a basic football objective standpoint of pursuing and knocking people down, he's ready for the NFL. As a sixth round draft pick, he'll need coaching in a lot of other areas, but there's potential galore here. Hopefully he can live up to my confusingly elevated expectations.

History: Adkins started exactly five games in four seasons in Miami. Last season, he only had 17 tackles, but 6 of those were for a less and he had 4 sacks. That's what we call making the most of your opportunities. Adkins was a highly touted linebacker/defensive end prospect coming out of high school. He dropped 20 pounds before his 2008 season and put up some nice workout numbers. Injuries aren't a real concern, but awareness may be. Check below.

Pros: Freakishly athletic. Look that phrase up and you'll see a picture of Adkins, which will jump out of your computer and beat you senseless. He's a fundamentally sound tackler who has more positional versatility than I originally realized, as he was used some as an edge rusher. He's fast enough to make that work, but powerful enough to potentially stay on the field when the ground attack is rolling for opponents. Seems to be a bright, humble kid.

Cons: Adkins pretty clearly isn't ready to see significant time on the field. There are real concerns about his awareness, lack of starting experience and fundamentals. Some concerns have been expressed about his lack of height, but the Falcons have had some success with linebackers around six feet (Demorrio Williams), so that's less of a concern than awareness in the passing game. Some of that can be coached, but it's not going to happen overnight, relegating Adkins to a project role.

Role: If Adkins makes the team, he'll be buried on the linebacker depth chart and have a real chance to contribute on special teams. If he sees the field at all defensively in 2009, it'll be in games that are out of hand to get him a little experience. It's unclear if he'll be asked to man the middle or the edges, but he would seem to be a potential upgrade over Tony Gilbert behind Curtis Lofton. Look for him to start making noise in 2010 or later.

Final Thoughts: Maybe I'm just a sunny, optimistic soul, but I see real potential for Adkins to contribute in the long-term. I like when teams occasionally take a gamble on a high-upside guy like Adkins, particularly when it's so late in the draft. You'll likely forget about him next year, but success may come earlier than we think.