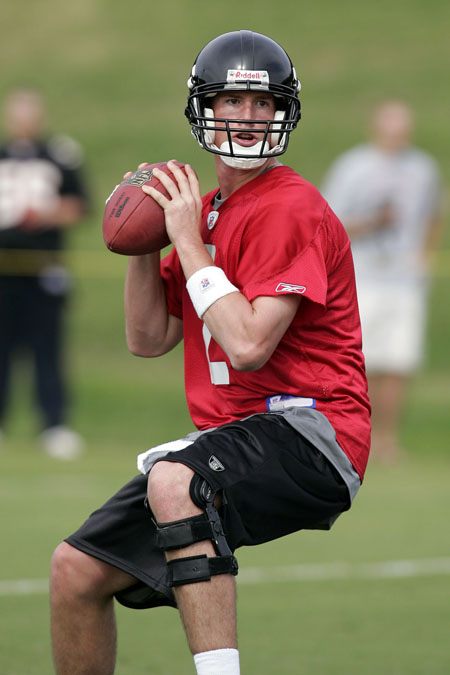 Welcome to a new user-suggested feature, where we'll be taking brief looks at each position on the roster, handing out grades like candy and talking briefly about what fans can expect from the position. Because this is late May and early June, a lot may change, so be sure to take the roster predictions with a few grains of salt. It's good for your heart.

Today we tackle the position belonging to the least-contended starter on the roster, one Matt Ryan, who stole our hearts and made a fool out of some--or maybe just one--mouth-breathing blogger.

Join me after the jump, won't you?

Matt Ryan, Starter, A: Ryan's body of work is only a single season, but it's enough to get him a stellar grade early. No one's going to challenge our star sophomore for his starting spot, not after he showed poise, leadership and true talent at the position during his rookie season. The team has gotten him a shiny new toy in Tony Gonzalez and has made a couple of low-impact moves in hopes of improving the offensive line, so there will be plenty of chances for Ryan to further his development. If he can avoid the slight decline that marked the second half of his 2008 season and continue to prove steady at the helm for the Falcons, then this grade will be well-deserved. Barring injury, he shouldn't have any problems.

Chris Redman, Backup, B: You know what you're getting with Chris Redman, which is to say a solid backup with little upside who can start in a pinch. No matter how impressive D.J. Shockley or John Parker Wilson are this off-season, they have little to no chance of edging out Redman. A quiet veteran with a decent arm, Redman will hopefully never have to see the field, but 2007 gave us a good luck at what he can do if required. If I seem lukewarm on Redman, it's only because I'm always a big fan of giving younger guys a chance. He's actually one of the better backups in the league.

D.J. Shockley, Third-String, C+: Shock's actually one of the more divisive players on the Falcons, and I think it boils down to believers in his talent, non-believers in his talent and the sharp line between homerism and cynicism. It doesn't appear that he's ever going to be more than a backup in this league, but he's got some athletic ability and a quality arm, which is more than can be said for many, many backups in the NFL. This isn't the year he charges into the backup spot, but I can't imagine him losing his current spot unless he really struggles. I also can't imagine he's going to have any real role unless everything goes terribly awry.

John Parker Wilson, Practice Squad/Cut, D+: JPW seems like the kind of guy who will hang around in this league, but it's going to be on the strength of will. Scouts seem nearly united against the strength and accuracy of his arm, and he's not going to blow you away with his athleticism. He's definitely got the football smarts necessary, but the physical tools are going to hamper him. A truly transcendant off-season could propel him by Shockley, but I don't believe he has the upside necessary to ever climb higher than third on the depth chart. I'd love to see if he can develop beyond my expectations, but this isn't a league that rewards patience. I don't expect him to be on the final roster.

So that's my opinion. Do you agree?