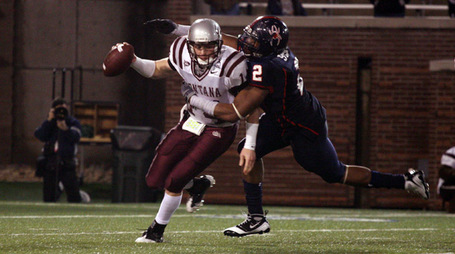 Lawrence Sidbury has begun his career with nearly universal praise, which is pretty darn good for a guy who has yet to play a game.

As a defensive end who could probably also handle linebacker, runs a great 40 and can bench press your couch a couple dozen times, Sidbury has drawn raves from draft gurus and beer-swilling troglodytes such as myself. It appears to be rich(mond)ly deserved so far, but what will Sidbury provide for the Falcons in his freshman campaign?

Join me after the jump to find out!

History: An Honor Roll student at Richmond who also dabbled in track-and-field. Against Montana in the FCS title game to end his college career, Sidbury managed four sacks and what I can only assume is a severe ego deflation for Montana. Is well-known as a bright kid (sensing a pattern with these draft picks yet?) who is always moving.

Pros: Has the frame to play defensive end and the room to add some bulk if need be. His burst of speed off the edge is incredibly quick and can catch a sluggish lineman off guard. Very aware of his surroundings and gladly jumps in when his help is needed. Changes direction well and springs off of blocks to try to make the play. Great work habits and by all accounts a good teammate. Overall, an excellent athlete, a smart player and someone who is going to work his tail off to get better.

Cons: Scouts don't think he has the ideal height and size to play defensive end in a 4-3, but nertz to them. Occasionally forgets to wrap up on his tackles and lets an alert running back get away from him.

Role: Sidbury is likely to push for snaps almost immediately. He's an impact player off the edge who seems equally adept against the pass and the rush, so it wouldn't be a stretch to imagine him spelling Chauncey Davis and John Abraham in his first year. If Davis and Jamaal Anderson falter on their side of the line, Sidbury could get a legitimate chance to start.

Final Thoughts: I really thought the Falcons made a lot of quality picks in this draft, but Sidbury may end up being the best of them all. He simply doesn't have many weaknesses, and barring injuries nothing's going to stop him from getting better than he is right now. I envision a bright future for this guy, potentially as the heir apparent to John Abraham.