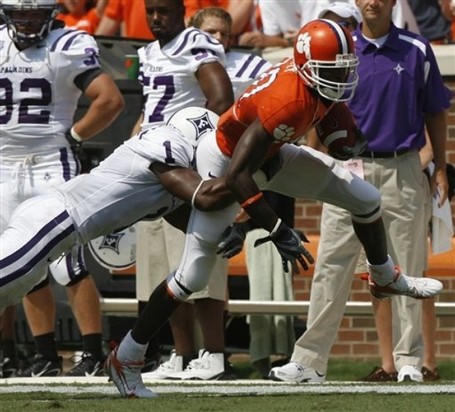 The most puzzling pick of the draft for the Atlanta Falcons was William Middleton. It would be unfair to expect more out of him because he was the second corner taken at a relatively deep and young position, but it's hard not to.

Fortunately for the greedy fan in all of us, Middleton seems like the kind of dude who can handle the weight of our unreasonable expectations. Can he overcome his draft position and make noise for the Falcons?

Join me after the jump for my somewhat informed opinion.

History: First off, Middleton is a biology major who plans to attend medical school after football. As an ink-stained wretch of the newspaper caste, that's just impressive to me. Named MVP of the Furman squad his senior season, when he was an All-American. Widely acknowledged as an on-the-field leader.

Pros: Middleton is surprisingly strong for a shorter corner, which allows him to get physical with receivers at the line of scrimmage. Terrific hitter for a corner. Reads plays well and has the hands to grab the occasional interception. His intangibles--which I don't normally like to judge a player on--are off the chart, as everything I've read about him suggests he's a true team leader. At a 4.46 40, he's pretty damn quick. Could potentially contribute in the return game.

Cons: Another in a series of sub-six foot corners the Falcons are trying to match up against taller receivers. If he's beaten, scouts say his acceleration isn't up to the task of catching faster receivers. Not the world's greatest jumper, which compounds his issues against taller guys. While he has the physical tools to be a disruptive force, his tackling is said to be a bit inconsistent.

Role: I'd love to see Middleton moving up the depth chart his first year, but the best case scenario would be for him to win a job as the fourth cornerback. He'll likely see plenty of time on special teams, where he seems likely to be effective, and may get on the field in blowouts. He's relatively polished, so the coaching staff will have to determine if he's consistent enough to become a force. I'm no longer betting against him, but don't look for him to kick more than a couple of butts in 2009.

Final Thoughts: There's actually a lot to like with Middleton. He doesn't have ideal height, but he's the very definition of solid as a cornerback. Like most late-round picks, the team isn't going to hand him the keys to the unstoppable killing machine his rookie season, but there's enough to like here that he could be contending for a nickel role in the years ahead.